And the temple which I build will be great, for our God is greater than all gods. 6 But who is able to build Him a temple, since heaven and the heaven of heavens cannot contain Him? Who am I then, that I should build Him a temple, except to burn sacrifice before Him? 2 Chronicles 2:5-6

Then the priest of Zeus, whose temple was in front of their city, brought oxen and garlands to the gates, intending to sacrifice with the multitudes. Acts 14:13

During the Mayan Postclassic period, the most common form of human sacrifice was heart extraction, influenced by the rites of the Aztecs in the Valley of Mexico; this usually took place in the courtyard of a temple, or upon the summit of the pyramid. Wikipedia Encyclopedia.

2) Jesus Christ was more important than the Jerusalem temple.

“Yet I say to you that in this place there is One greater than the temple. But, if you had known what this means, ‘I desire mercy and not sacrifice,’ you would not have condemned the guiltless. For the Son of Man is Lord even of the Sabbath.” Matthew 12:6-8

3) Jesus Christ prophesied the destruction of the Jerusalem temple.

Then Jesus went out and departed from the temple, and His disciples came up to show Him the buildings of the temple. And Jesus said to them, “Do you not see all these things? Assuredly, I say to you, not one stone shall be left here upon another, that shall not be thrown down.” Matthew 24:1-2

4) Jesus Christ emphasized the importance of Himself over the Jerusalem temple.

Jesus answered and said to them, “Destroy this temple, and in three days I will raise it up.” Then the Jews said, “It has taken forty-six years to build this temple, and will You raise it up in three days?” But He was speaking of the temple of His body. Therefore, when He had risen from the dead, His disciples remembered that He had said this to them; and they believed the Scripture and the word which Jesus had said. John 2:19-22

5) Temples and buildings are not important in the worship of God.

Jesus said to her, “Woman, believe Me, the hour is coming when you will neither on this mountain, nor in Jerusalem, worship the Father. You worship what you do not know; we know what we worship, for salvation is of the Jews. But the hour is coming, and now is, when the true worshipers will worship the Father in spirit and truth; for the Father is seeking such to worship Him. God is Spirit, and those who worship Him must worship in spirit and truth.” John 4:21-24

6) God is not limited to temples and buildings.

But Solomon built Him a house. “However, the Most High does not dwell in temples made with hands, as the prophet says: ‘Heaven is My throne, and earth is My footstool. What house will you build for Me? says the Lord, or what is the place of My rest?” Acts 7:47-49

God, who made the world and everything in it, since He is Lord of heaven and earth, does not dwell in temples made with hands. Acts 17:24

7) Tangible temple buildings are not important spiritually now or in the future.

Or do you not know that your body is the temple of the Holy Spirit who is in you, whom you have from God, and you are not your own? For you were bought at a price; therefore, glorify God in your body and in your spirit, which are God’s. 1 Corinthians 6:19-20

And what agreement has the temple of God with idols? For you are the temple of the living God. As God has said: “I will dwell in them and walk among them. I will be their God, and they shall be My people.” 2 Corinthians 6:16

Now, therefore, you are no longer strangers and foreigners, but fellow citizens with the saints and members of the household of God, having been built on the foundation of the apostles and prophets, Jesus Christ Himself being the chief cornerstone, in whom the whole building, being fitted together, grows into a holy temple in the Lord, in whom you also are being built together for a dwelling place of God in the Spirit. Ephesians 2:19-22

But I saw no temple in it (New Jerusalem), for the Lord God Almighty and the Lamb are its temple. The city had no need of the sun or of the moon to shine in it, for the glory of God illuminated it. The Lamb is its light. Revelation 21:22-23

Temples are literally houses of the Lord. They are holy places of worship where individuals make sacred covenants with God. Because making covenants with God is such a solemn responsibility, individuals cannot enter the temple to receive their endowments or be sealed in marriage for eternity until they have fully prepared themselves and been members of the Church for at least a year. Throughout history, the Lord has commanded His people to build temples. The Church is working to build temples all over the world to make temple blessings more available for a greater number of Heavenly Father’s children. churchofjesuschrist.org

Note: The Church of Jesus Christ of Latter-day Saints (Mormons) disavow salvation by Jesus Christ in their temples.

In the Church, an ordinance is a sacred, formal act performed by the authority of the priesthood. Some ordinances are essential to our exaltation. These ordinances are called saving ordinances. They include baptism, confirmation, ordination to the Melchizedek Priesthood (for men), the temple endowment, and the marriage sealing. With each of these ordinances, we enter into solemn covenants with the Lord. churchofjesuschrist.org 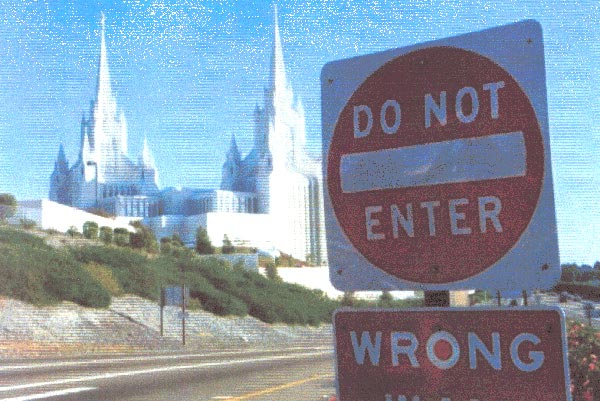