CAUSE FOR THE CRUSADES

SELJUKS, Turkish dynasty prominent in the Middle East during the 11th and 12th centuries. Originally a clan belonging to the Ghuzz, a Turkoman tribe of Central Asia, they were converted to Islam in the 10th century and established (1) themselves in the Iranian province of Khurasan in the early 11th century. In the period between 1040 and 1055, their chief, Togrul Beg (c. 990 - 1063), conquered (2) most of Iran and Iraq and made himself protector of the Caliph of Baghdad, spiritual leader of the Sunni (orthodox) Muslims. Togrul was given the title sultan by the caliph and made war (3) on the Shia Muslims, who rejected the caliph's authority. Under his successors, Alp Arslan (r. 1063 - 72) and Malik Shah (r. 1072 - 92), the empire of the Seljuks was further extended into Syria, Palestine, and Anatolia. Alp Arslan's victory over the Byzantines at the Battle of Manzikert (1071) alarmed the Christian world, and Seljuk aggressiveness (4) was a major reason for launching the First Crusade (1095). Funk & Wagnalls Encyclopedia, Volume 23, page 290.

1) The Seljuks conquered the Khurasan province soon after converting to Islam.

2) The Seljuks continued their warfare throughout area covering modern Iran and Iraq.

3) The Seljuks declared a jihad against Muslims who rejected the caliph dictatorship.

4) The Seljuks slaughtered Christians throughout Asia Minor during the 11th century.

The pope left Italy for his native France, the home of chivalry, a land accustomed to send valiant knights to fight the Muslims in Spain. At Clermont in Auvergne, Urban summoned a council of the bishops and abbots of France. There, on November 27, 1095, he addressed the ecclesiastics and a select gathering of knights in what (judged by its results) was one of the great speeches of history. He described the sufferings of the Christians in the East, telling in vivid and grisly detail how the Turks "have destroyed the altars that they have polluted with their foul practices. They have circumcised the Christians, spreading the blood on the altars and pouring it on the fonts. And they cut open the bellies of those whom they choose to torment with a loathsome death, tear out their bowels and tie them to a stake, drag them around and flog them, before killing them as they lie on the ground with their entrails all hanging out." THE DIVINE CAMPAIGNS, Time - Life Books, page 62.

After a journey of many months, the Crusaders arrived in Constantinople, to be greeted with a cautious welcome from the perplexed emperor Alexius. He ordered the People's Crusade to be fed and sheltered well outside the city walls, and soon arranged for the pilgrims to be ferried across the Bosporus, leaving them to march across the sixty miles of no man's land that separated Constantinople from Nicaea, the capital of Kilij Arslan, the hostile Seljuk sultan of Rum. In October, in these wilds, the People's Crusade met its first serious enemy. One party, cutoff by the Turks in a hilltop fort with no water supply, endured eight days of thirst. Desperate, they lowered rags into the castle's sewer and squeezed out the liquid that they brought up. At last, however, they surrendered, and some turned Muslim. The Turks sold the others as slaves or used them for target practice. The main body, a little later, marched into Kilij Arslan's ambush and were massacred or enslaved. THE DIVINE CAMPAIGNS, page 64.

Note: After four hundred fifty years of Muslim violence and bloodshed the knights of Europe attacked the Muslim infidels. 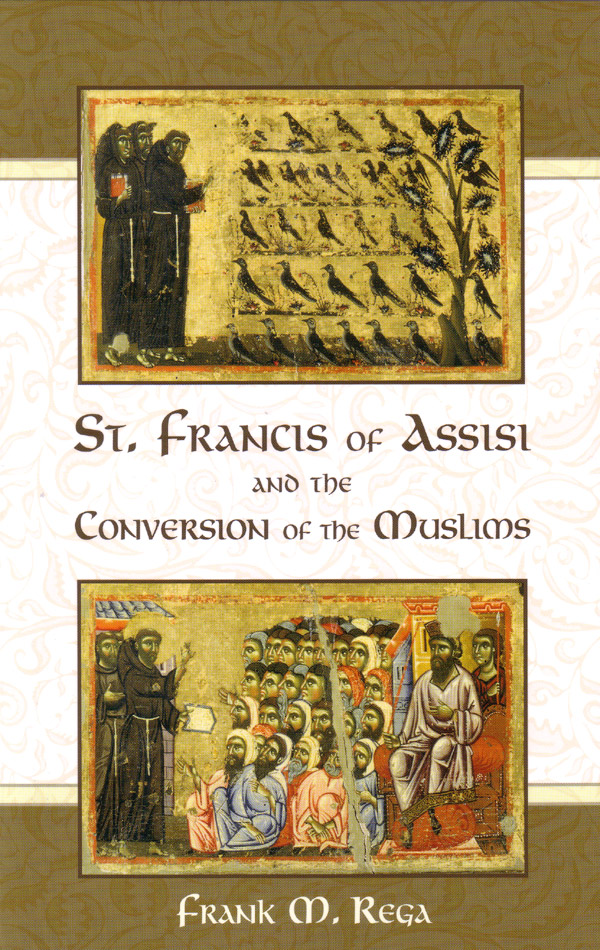 St. Francis of Assisi and the Conversion of the Muslims

The entire historical episode of the Crusades (11th through 13th centuries) against the Muslim forces in and about the Holy Land is almost universally misunderstood by people today. The Catholic historian and historical commentator, Hilaire Bello (1870-1953), has perhaps best explained the root cause of the Crusades. They were due to the Muslim attacks on the Eastern Roman Empire, under the Roman government at Constantinople (which finally fell to the Turks in 1453). Belloc maintains that the Roman Empire in the West never actually "fell," as most history texts would have it, dating this "fall" at 476 A.D., when Rome in the West failed to select a new Emperor. Belloc maintains that there was no single force big enough during during Rome's history to defeat it entirely - though portions of the Empire in the West were whittled away. Rather, the Empire in the West grew old and changed, and the government from Rome, and later from Ravenna, was no longer effectively able to manage it. Yet the people of the Empire still considered themselves part of the Empire, a fact illustrated in the year 800, when Charlemagne was crowned Holy Roman Emperor at Rome. Why would he call his realm by this name unless he and his people believed the Empire still existed? In the 6th century, Islam had exploded out of Arabia, taken all of North Africa, and by the first third of the 8th century had conquered Spain. Its advance in Europe was halted in central France in 732 when the forces of Charles Martel defeated the Muslim army at Tours, after which they retired behind the Pyrenees Mountains in Spain. Then when the Turks were converted to Islam and the entire Islamic holy wars were renewed during the 10th Century in the Holy Land and Middle East - an area under the Eastern Roman Empire - the people of the West (with all this history well in mind) rose up in the form of Crusades, or a holy war against Islam, finally in order to come to the aid of the Eastern portion of THEIR EMPIRE - which for the past 1,000 years had controlled the Middle East! In this light, the Crusades make great sense, especially when one realizes that the Christians of the Roman Empire had been battling Islam for more than 500 years when the First Crusade was launched. - Publisher, 2007.