For Jews request a sign, and Greeks seek after wisdom; but we preach Christ crucified, to the Jews a stumbling block and to the Greeks foolishness, but to those who are called, both Jews and Greeks, Christ the power of God and the wisdom of God. 1 Corinthians 1:22-24 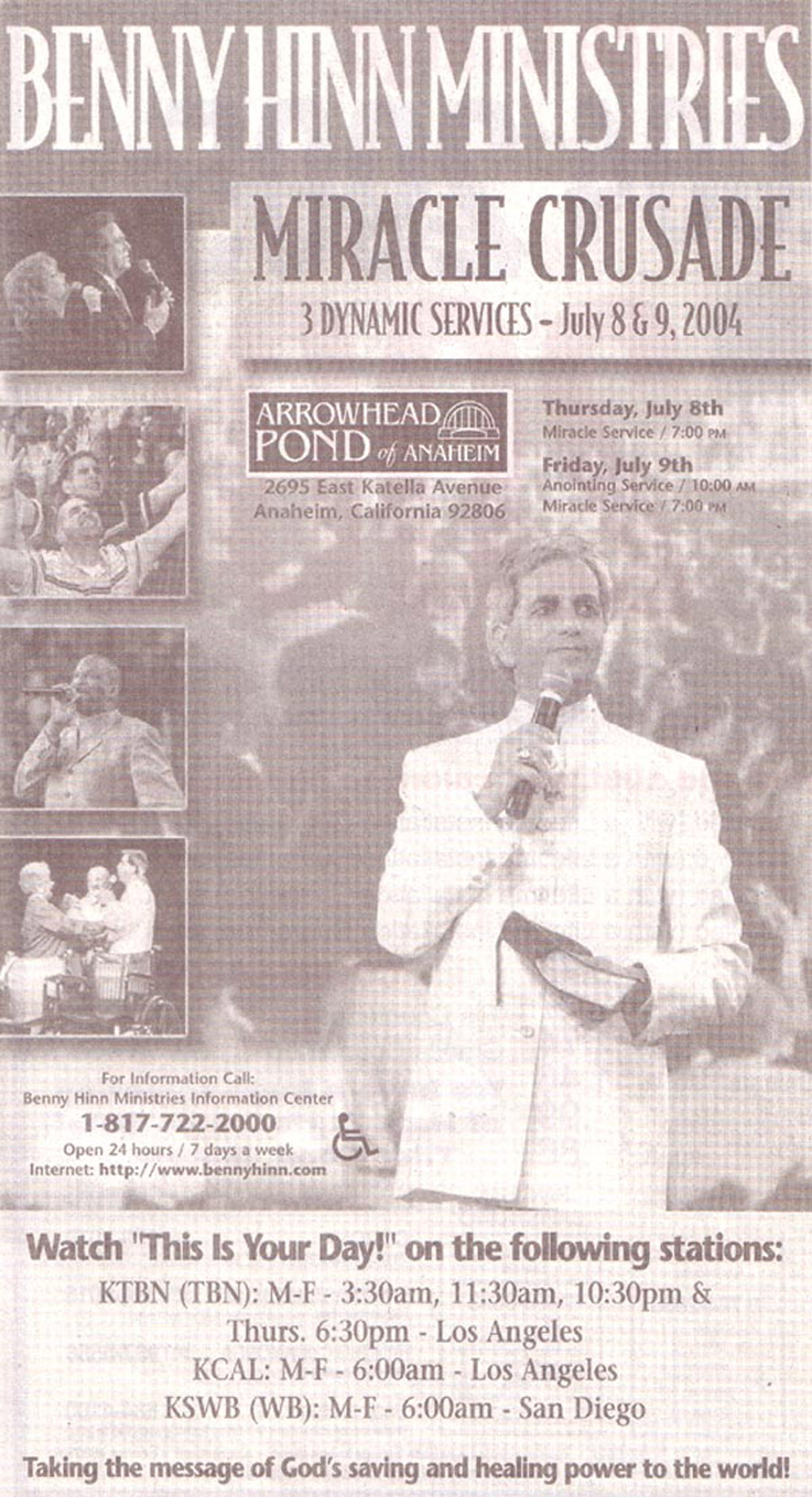 A Question of Miracles

In April 2001, HBO aired a documentary entitled A Question of Miracles that focused on Hinn and a well-documented fellow Word-of-Faith German minister based in Africa, Reinhard Bonnke. Both Hinn and Bonnke offered full access to their events to the documentary crew, and the documentary team followed seven cases of "miracle healings" from Hinn's crusade over the next year. The film's director, Antony Thomas, claimed to CNN's Kyra Phillips that they did not find any cases where people were actually healed by Hinn. Thomas said in a New York Times interview that "If I had seen miracles [from Hinn's ministry], I would have been happy to trumpet it...but in retrospect, I think they do more damage to Christianity than the most committed atheist."

"Do You Believe in Miracles"

In November 2004, the CBC Television show The Fifth Estate did a special titled "Do You Believe in Miracles" on the apparent transgressions committed by Benny Hinn's ministry.

With the aid of hidden cameras and crusade witnesses, the producers of the show demonstrated Benny's apparent misappropriation of funds, his fabrication of the truth, and the way in which his staff chose crusade audience members to come on stage to proclaim their miracle healings. In particular, the investigation highlighted the fact that the most desperate miracle seekers who attend a Hinn crusade—the quadriplegics, the brain-damaged, virtually anyone with a visibly obvious physical condition—are never allowed up on stage; those who attempt to get in the line of possible healings are intercepted and directed to return to their seats. At one Canadian service, hidden cameras showed a mother who was carrying her Muscular Dystrophy-afflicted daughter, Grace, being stopped by two screeners when they attempted to get into the line for a possible blessing from Benny. The screeners asked the mother if Grace had been healed, and when the mother replied in the negative, they were told to return to their seats; the pair got out of line, but Grace, wanting "Pastor Benny to pray for [her]," asked her mother to support her as she tried to walk as a show of "her faith in action," according to the mother. After several unsuccessful attempts at walking, the pair left the arena in tears, both mother and daughter visibly upset at being turned aside and crying as they explained to the undercover reporters that all Grace had wanted was for Benny to pray for her, but the staffers rushed them out of the line when they found out Grace had not been healed. A week later at a service in Toronto, Baptist evangelist Justin Peters, who wrote his Masters in Divinity thesis on Benny Hinn and has attended numerous Hinn crusades since 2000 as part of his research for his thesis and for a seminar he developed about the Word of Faith movement entitled A Call for Discernment, also demonstrated to the hidden cameras that "people who look like me"—Peters has cerebral palsy, walks with arm-crutches, and is obviously and visibly disabled—"are never allowed on stage[...]it's always somebody who has some disability or disease that cannot be readily seen." Like Grace and her mother, Peters was quickly intercepted as he came out of the wheelchair section (there is one at every crusade, situated at the back of the audience, far away from the stage, and never filmed for Hinn's TV show) in an attempt to join the line of those waiting to go onstage, and was told to take a seat. This segment was later edited with new footage and shown on Dateline: NBC in November 2005.

In March 2005, Ministry Watch issued a Donor Alert against the ministry. Benny Hinn Ministries is not a member of the Evangelical Council for Financial Accountability.