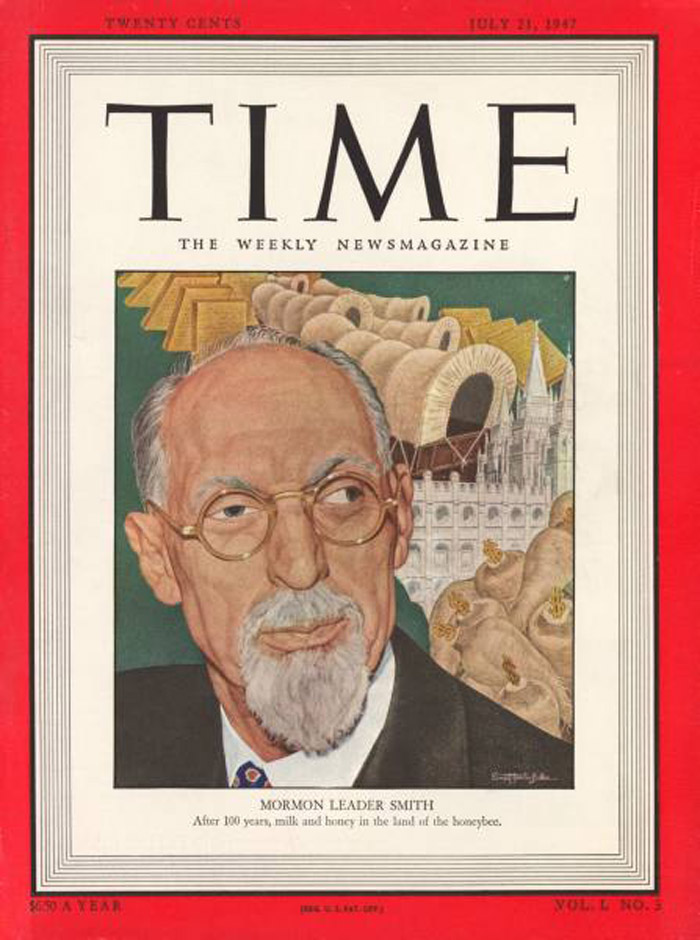 George Albert Smith, Sharing the Gospel With Others, p.50-51 My faith in God was increased by reading the Book of Mormon, the Doctrine and Covenants and Pearl of Great Price. When I was called to leave home and loved ones to travel among strangers to promulgate the Gospel of Jesus Christ, as restored in these latter days, I witnessed the power of the Lord in softening the hearts of men and providing for my necessities and preserving my life. Some of my happiest moments have been when testifying of the beauties of the gospel as revealed through Joseph Smith the Prophet.

Correction: The gospel of Jesus Christ was never lost.

Matthew 16:18 And I say to you that you are Peter, and on this rock (confession) I will build My church, and the gates of Hades shall not prevail against it.

Romans 10:8-9 But what does it say? "The word is near you, even in your mouth and in your heart (that is, the word of faith which we preach): that if you confess with your mouth the Lord Jesus and believe in your heart that God has raised Him from the dead, you will be saved.

George Albert Smith, Sharing the Gospel With Others, p.61 It was by faith that the great city of Nauvoo was founded, under the direction of the Prophet Joseph Smith, and by faith the glorious truths contained in the Doctrine and Covenants were received by him.

Correction: Not by faith but by false prophesies was the Nauvoo House built.

D&C 124:56-60 And now I say unto you, as pertaining to my boarding house which I have commanded you to build for the boarding of strangers, let it be built unto my name, and let my name be named upon it, and let my servant Joseph and his house have place therein, from generation to generation. For this anointing have I put upon his head, that his blessing shall also be put upon the head of his posterity after him. And as I said unto Abraham concerning the kindreds of the earth, even so I say unto my servant Joseph: In thee and in thy seed shall the kindred of the earth be blessed. Therefore, let my servant Joseph and his seed after him have place in that house, from generation to generation, forever and ever, saith the Lord. And let the name of that house be called Nauvoo House.

Deuteronomy 18:20 But the prophet who presumes to speak a word in My name, which I have not commanded him to speak, or who speaks in the name of other gods, that prophet shall die.

George Albert Smith, Conference Report, October 1925, p.31 Then the Lord said: Let us go down. And they went down at the beginning, and they, that is the Gods, organized and formed the heavens and the earth. And the earth, after it was formed, was empty and desolate, because they had not formed anything but the earth; and darkness reigned upon the face of the deep, and the Spirit of the Gods was brooding upon the face of the waters. And they (the Gods) said: Let there be light; and there was light. And they (the Gods) comprehended the light, for it was bright; and they divided the light, or caused it to be divided, from the darkness.

Correction: Not many Gods but only one God created the universe.

Genesis 1:1-2 In the beginning God created the heavens and the earth. The earth was without form, and void; and darkness was on the face of the deep. And the Spirit of God was hovering over the face of the waters.

Polytheism: The belief in or worship of more than one God. Webster's Dictionary

Christian: One who professes belief in the teachings of Jesus Christ. Webster's Dictionary