Come and be a part of the RIVER OF GOD - Bringing REVIVAL to His Church Worldwide, and HEALING TO THE NATIONS - and to YOU! "The glory of this latter house shall be greater than of the former saith the Lord of Hosts..." Haggai 2:9

Correction: The future reign of Jesus Christ brings healing to the nations not Morris Cerullo.

Revelation 22:2 In the middle of its street, and on either side of the river, was the tree of life, which bore twelve fruits, each tree yielding its fruit every month. The leaves of the tree were for the healing of the nations.

Correction: Haggai 2:9 is a prophecy about the future New Jerusalem.

Revelation 21:2 Then I, John, saw the holy city, New Jerusalem, coming down out of heaven from God, prepared as a bride adorned for her husband.

THE GREATEST SIGN OF THE OLD TESTAMENT. God raised up the Jew for a divine purpose - to call Himself out a people - give these people His Name and manifest to the world that there is only ONE God and His Name is Jehovah - the Great I AM. There was no preaching done by the Jews that showed the world that Jehovah was God. God manifested Himself by working MIRACLES in the circumstances of their lives. The heathen nations soon discovered Who was the true God. When the Jews marched against their enemies they trembled, and said, "Here comes the Jew, whose God is Jehovah. WHOSE GOD ANSWERS THEIR PRAYERS. WHEN THEY SPEAK, SOMETHING HAPPENS!"

Correction: Jesus Christ was the greatest sign of the Old Testament not the Jews.

Exodus 12:13 'Now the blood shall be a sign for you on the houses where you are. And when I see the blood, I will pass over you; and the plague shall not be on you to destroy you when I strike the land of Egypt.'

Isaiah 7:14 "Therefore the Lord Himself will give you a sign: Behold, the virgin shall conceive and bear a Son, and shall call His name Immanuel."

Note: Jehovah is not the name of God.

The word was erroneously transliterated from the Masoretic Hebrew text and consists of the consonants JHVH or JHWH, with the vowels of a separate word, Adonai (Lord). Funk & Waggonal Encyclopedia.

THE GREATEST SIGN OF THE NEW TESTAMENT. 2,000 years ago the Church of Jesus Christ was born in a mighty MANIFESTATION OF GOD'S POWER. The Church was INFUSED with dunamis power - that took over every fiber of their being. This unique characteristic gave them divine capability to produce the proof of the resurrection of Jesus Christ, the Son of the Living God. The believers boldly proclaimed the Word - with signs, wonders and miracles following. By the third century, the Early Church reached their entire known world with the Gospel of Jesus Christ.

Correction: Jesus Christ is the greatest sign of the New Testament not the Church.

(His birth) Luke 2:12 "And this will be the sign to you: You will find a Babe wrapped in swaddling cloths, lying in a manger."

(His resurrection) Matthew 16:4 "A wicked and adulterous generation seeks after a sign, and no sign shall be given to it except the sign of the prophet Jonah."

(His return) Matthew 24:30 "Then the sign of the Son of Man will appear in heaven, and then all the tribes of the earth will mourn, and they will see the Son of Man coming on the clouds of heaven with power and great glory."

In 1996 I prophesied that a NEW WAVE of God's Pentecostal POWER - was going to sweep the world...AN UNPRECEDENTED OUTPOURING OF UNLIMTED POWER!

Correction: Prophets are no longer an office in the Church.

Hebrew 1:1-2 God, who at various times and in various ways spoke in time past to the fathers by the prophets, has in these last days spoken to us by His Son, whom He has appointed heir of all things, through whom also He made the worlds;

Note: The foundation of the church of Jesus Christ does not need to be established again.

Ephesians 2:19-22 Now, therefore, you are no longer strangers and foreigners, but fellow citizens with the saints and members of the household of God, having been built on the foundation of the apostles and prophets, Jesus Christ Himself being the chief corner stone, in whom the whole building, being joined together, grows into a holy temple in the Lord, in whom you also are being built together for a dwelling place of God in the Spirit.

I also prophesied that during this later day outpouring of God's Spirit, we would see the greatest harvest of souls in all the history of the Church.

Correction: People would fall away from the truth before the revelation of the anti-christ.

2 Thessalonians 2:3-4 Let no one deceive you by any means; for that Day will not come unless the falling away comes first, and the man of sin is revealed, the son of perdition, who opposes and exalts himself above all that is called God or that is worshiped, so that he sits as God in the temple of God, showing himself that he is God.

The River of God's Spirit is here! 1999 will be an incredible year of MANIFESTATION and DEMONSTRATION of God's POWER!

Correction: The Holy Spirit will not testify of Himself but of Jesus Christ.

The River of God's Spirit is rising throughout the whole earth. It's God's Spirit being poured out upon all flesh. (Joel 2:28)

Correction: This will occur during the great tribulation and specifically on the Jews.

Joel 3:1-2 "For behold, in those days and at that time, when I bring back the captives of Judah and Jerusalem, I will also gather all nations, and bring them down to the Valley of Jehoshaphat; And I will enter into judgment with them there on account of My people, My heritage Israel, whom they have scattered among the nations; They have also divided up My land."

It's a River that will not be surpassed - (to transcend the reach, capacity, or powers of) - Wherever and to whomever the Spirit of God touches - shall be HEALED, made PURE - and shall LIVE. (Ezekiel 47:5-9)

Correction: Ezekiel 47:5-9 is a prophecy about the millennial reign of Jesus Christ.

Acts 20:29 "For I know this, that after my departure savage wolves will come in among you, not sparing the flock." 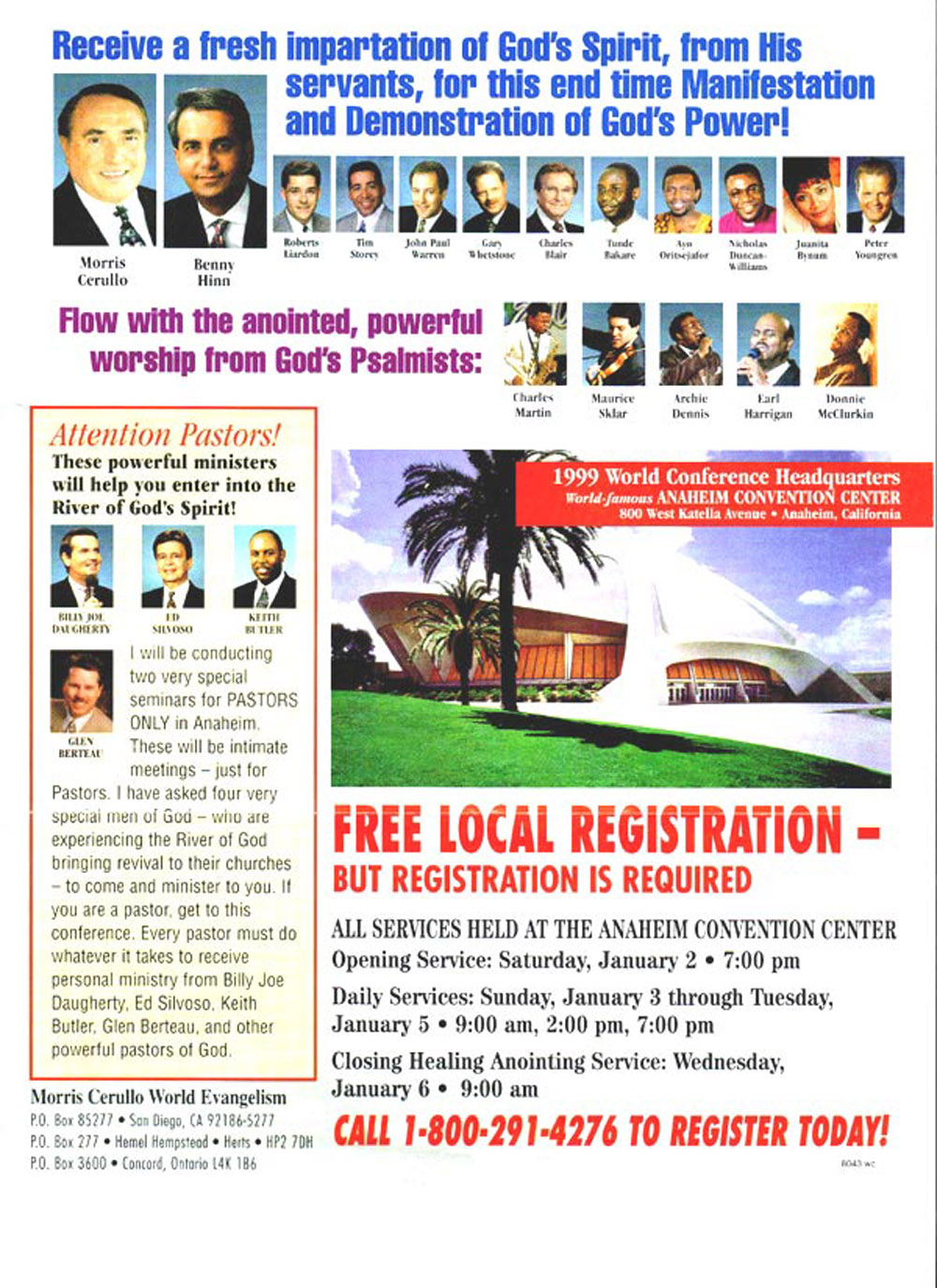 If convicted, he would face a maximum penalty of three years in prison and a $100,000 fine.

Cerullo is to surrender to authorities, perhaps as early as next week, Assistant U.S. Attorney George Hardy said.

Hardy declined to provide further details about the case, including the source of the income that Cerullo is alleged to have not reported.

Gregory Vega, the lawyer for the evangelist who has claimed his cable network is the second-largest of its kind in the world, said Cerullo will contest the charges. He said the ministry has been examined – and cleared – by the Internal Revenue Service.

"Dr. Cerullo looks forward to an opportunity to respond to the allegations in a court of law," Vega said. "And he is pleased that after three years of investigation by the IRS, nothing was found to be inappropriate in the operation of the ministry."

Cerullo has been involved in numerous real estate and business transactions in San Diego, in addition to his ministry operations. He purchased the El Cortez hotel in 1978, then sold it three years later, reportedly for more than twice what he paid.

In 1992, his ministry, which has headquarters in Kearny Mesa, gained control of the television network formerly controlled by disgraced evangelist Jim Bakker.

In 2000, Cerullo was sued by a former employee who, among other things, accused Cerullo of "unethical and fraudulent fundraising techniques." The suit was dismissed in 2002 by an appeals court, which ruled that the religious freedom clause of the U.S. Constitution barred courts from getting involved in the internal disputes of religious organizations, according to a summary of the case by the First Amendment Center, a research organization based at Vanderbilt University in Nashville, Tenn.

Cerullo could not be reached for comment yesterday afternoon.