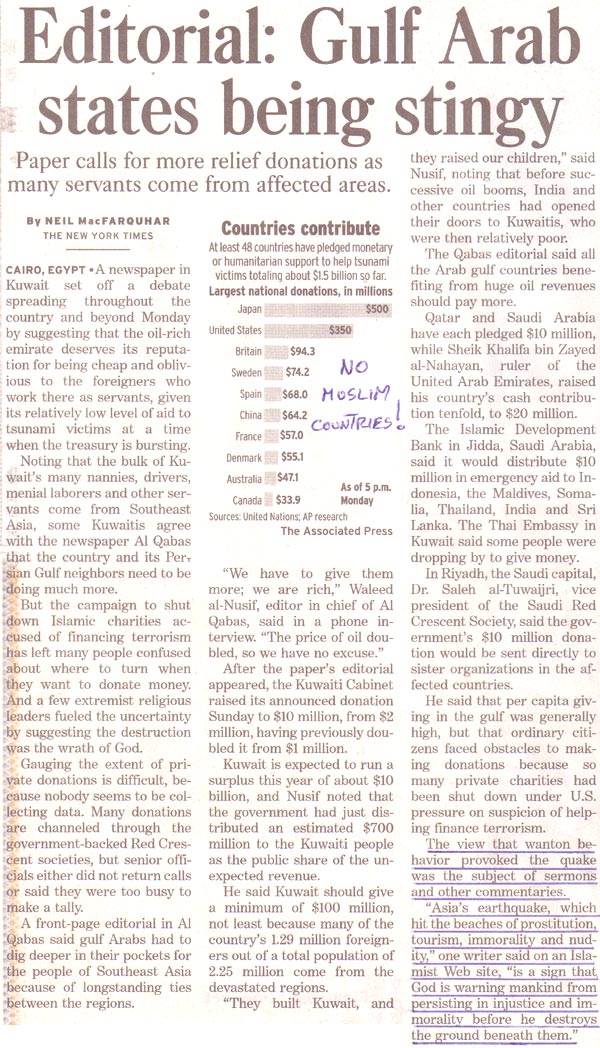 NO COMPASSION IN MUSLIM CULTURE
'Fatwa’ by Muslim leaders against terrorism should address 100 verses in the Koran sanctioning violence, expert says
By Art Toalston
Jul 29, 2005

WASHINGTON (BP)--A “fatwa,” or religious edict, against terrorism by a council of Muslim scholars is something “we do indeed welcome,” a leading Baptist expert on Islam said, though noting that it falls short of effectively addressing the death and destruction wrought by Islamic radicals.

Anis Shorrosh, author of several books on Islam who, as an evangelist, has debated Muslim scholars in the United States, England, Canada and other countries, noted: “Muslim scholars worldwide must agree that the nearly 100 verses in the Qur’an [Koran] which promote fighting and killing can no longer be valid. Otherwise, terrorism by Muslim fanatics will continue until the end of time.”

Shorrosh cited one such Koranic verse: "I will strike terror into the hearts of those who disbelieve. Smite, then, the upper part of their necks and smite off all fingertips" (Surah 8:12 in the Koran).

The July 28 fatwa against terrorism was issued by the Fiqh Council of North America, described in a State Department news release as “a body of 18 Muslim scholars who have been trained in Islamic jurisprudence and are deemed qualified to interpret Islamic law as it is revealed in the Qur’an and the teachings of the Prophet Muhammad.”

Shorrosh, of Fairhope, Ala., noted that “American Muslims, by and large, have bought into our democratic way of life and therefore they are quite different from the rest of the world’s Muslims who do not live under democracy.” Muslims in such countries, he stated, “are more strict observers of the Quar’anic teachings.”

A key aim of Islamic terrorists is “to stop the advance of democracy and Christianity, which cannot be stopped,” said Shorrosh, who asserted that “nearly 3 million Muslims have been turning to Christianity annually since 1991.” Shorrosh’s latest book is titled, “Islam: A Threat or Challenge.”

The fatwa against terrorism issued by the Fiqh Council of North America, unveiled by several leaders during a news conference in Washington, has been endorsed by more than 120 North American Muslim organizations, leaders and institutions.

“Islam strictly condemns religious extremism and the use of violence against innocent lives,” the 440-word fatwa states. “There is no justification in Islam for extremism or terrorism. Targeting civilians' life and property through suicide bombings or any other method of attack is haram -- or forbidden -- and those who commit these barbaric acts are criminals, not ‘martyrs.’”

The fatwa cited four passages from the Koran and one from the second most authoritative Islamic source, the Sunnah, or words and actions of Muhammad.

“1. All acts of terrorism targeting civilians are haram (forbidden) in Islam.

“2. It is haram [forbidden] for a Muslim to cooperate with any individual or group that is involved in any act of terrorism or violence.

“3. It is the civic and religious duty of Muslims to cooperate with law enforcement authorities to protect the lives of all civilians.”

Tony Maalouf, assistant dean of Southwestern Baptist Theological Seminary’s school of evangelism and mission in Fort Worth, Texas, told Baptist Press, “That there are in the Qur’an verses that call to peace and tolerance is something no one can deny. The edict quotes some of these....

“However, radical Islamists have at various periods of history used the militant verses of the Qur’an in order to justify killing in the name of God in jihad,” said Maalouf, an associate professor of missions and author of “Arabs in the Shadow of Israel.”

“Those controversial verses should next become the object of discussion with Muslim scholars in the States and throughout the world in order to seek an application of their teaching that is compatible with human rights,” Maalouf said. “There are many peace-seekers among Muslims and it is to those that we as Christians should stretch our hands in love and compassion.”

Nihad Awad, executive director of the Council on American-Islamic Relations, based in Washington, D.C., said at the July 28 news conference in Washington that a fatwa is “the heaviest weight any opinion can be given” by the Islamic community.”

“... [T]hose who commit acts of terror in the name of Islam try to misinterpret and misuse certain issues in Islamic jurisprudence and they have no authority or qualification except their anger,” Awad said, according to a Voice of America report. “These legal Muslim scholars [on the Fiqh Council] come to say we are the authority on this subject and we are the ones who determine how to interpret Islam. Therefore, I don't think any person in the globe can quote the Koran or the traditions of the Prophet [Muhammad] to justify the harming and the killing of innocent people."

Awad also stated, “United, we can confront the terrorists and frustrate their goal of sparking an apocalyptic war between faiths and civilizations.”

Salam al-Marayati, executive director of the Los Angeles-based Muslim Public Affairs Council, told the news conference that the Fiqh Council reflects “the mainstream, moderate voice of Muslim Americans and Muslims worldwide, as opposed to the extremist forgery of Islam by radicals.”

“The radicals do not have any Islamic legitimacy. They have no Islamic foundation. It is artificial, what they say, and it is outside the norms of Islam.”

Al-Marayati voiced hope that the fatwa “would influence other parts of the world, but more importantly I think we are doing this for our children and for our future.”

“Our children need to be very clear on these matters. There should be no confusion and no ambiguities,” al-Marayati said, as quoted by the VOA. “As we stand together, tall, as leaders of established Muslim-American organizations, this is a message to our future generation and to our children that this notion that suicide bombing or terrorism has any room in Islam is rejected outright."

The Muslim Council of Britain denounced the July 7 terrorist attacks in London, the Associated Press reported. The British group, however, said suicide bombings may be justified against occupying power, whereas the Fiqh Council’s fatwa makes no reference to actions in wartime circumstances.

Also, in a first for Germany, a Shiite mosque leader in Hamburg has issued a fatwa pronouncing that terrorism and the killing of innocent people should be violations of Islamic law, according to a United Press International report.

The Council on American-Islamic Relations recently launched a U.S.-wide “Not in the Name of Islam” campaign repudiating terrorism via TV and radio public service announcements and a petition drive. Among other Muslim initiatives nationwide, a “Muslim Mothers Against Violence” group has been formed in Cincinnati and the Muslim Public Affairs Council launched a “National Anti-Terrorism Campaign” last year that urges leaders of mosques to avoid “irresponsible rhetoric” and to cooperate with law enforcement officials.

(AP) - As they issued an edict condemning religious extremism, American Muslims hoped to silence complaints from outsiders dating back to the Sept. 11 attacks that the community has done too little to confront terrorism.

But as soon as the statement was released, sharp criticism came from another source - within the U.S. Muslim community itself.

Several American Muslim academics now say the edict, or fatwa, was so broad it was meaningless, and should have denounced specific terrorist groups including al-Qaida. Critics also said the declaration seemed geared more toward improving the faith's image rather than starting an honest discussion about Islamic teaching.

"The bulk of the Islamic tradition as it exists does stand against these lunatic, savage attacks on civilians," said Omid Safi, a Colgate University religion professor and chairman of the Progressive Muslim Union, an American reform group.

"But I would be more inclined to say there are elements of extremism in many parts of our tradition. Rather than simply saying these are not a part of Islam, I would acknowledge that these trends are there and do away with them."

Ibrahim Hooper, spokesman for the Council on American-Islamic Relations, a Washington-based civil rights group which endorsed the fatwa, said no specific groups were named because "it would have been a laundry list."

"I think you can safely regard anyone listed on the State Department list (of terrorist groups) as included," Hooper said. That list includes the Islamic militant group Hamas, which many Palestinians believe is waging a legitimate fight against Israel.

"It's not likely that someone who is already considering some act of terrorism would be dissuaded by this, but you never know if you're going to prevent someone from going on the ideological road that would lead them to this activity," Hooper said.

Muslims around the world have been under renewed pressure to denounce terrorism following July's deadly bombings in Britain and Egypt, along with the drumbeat of insurgent attacks on civilians and coalition troops in Iraq.

The U.S. fatwa, written by the Fiqh Council of North America, an advisory committee on Islamic law, said nothing in Islam justifies religious extremism or terrorism targeting civilians. The council further declared that Muslims were obligated to help law enforcement protect civilians anywhere from attacks.

Fiqh Council chairman Muzammil Siddiqi said the edict applied even when a Muslim country has been taken over by a foreign power. In Britain, two groups of Muslim leaders separately denounced the July 7 London attacks, but one said suicide bombing could still be justified against an occupying power, while another said it could not.

"Occupation is wrong, of course, but at the same time this is not the way," Siddiqi said.

But Abdullahi An-Na'im, who specializes in Islamic law and human rights at Emory University, said the American fatwa was misleading. He said the scholars could not say "in good faith" that Islamic law, called Shariah, required Muslims to assist an invader.

"What is Shariah's position on an invasion or occupation of a Muslim country by a non-Muslim country? Put bluntly in those terms, I don't think that any credible scholar could say this is legitimate," An-Na'im said. "If the same group of scholars were asked to issue a fatwa over the U.S. invasion and occupation of Iraq, which is the underlying thing, what would that fatwa be and how would Americans feel about it?"

The debate is complicated by the fact that Islam has no ordained clergy or central authority, like a pope, who can hand down definitive teaching. Islamic leaders with conflicting views regularly claim they are authorized to issue the edicts. An-Na'im pointed out that Iranian Ayatollah Ruhollah Khomeini issued fatwas promoting violence against what he saw as Muslim oppressors; An-Na'im wondered why any Muslim would feel bound, then, to follow the American declaration denouncing it.

Muqtedar Khan, a political scientist at the University of Delaware and author of American Muslims, said it appeared the main aim of the U.S. fatwa was protecting U.S. Muslim leaders and organizations from criticism. And the edict may have fallen short of even that goal, he said.

Disagreement over the declaration was inevitable - American Islam is a diverse mix of millions of immigrants and U.S.-born converts. Also, there is no major centre of Islamic learning in the United States.

Yet even critics acknowledged something constructive could develop from the fatwa, despite its shortcomings. Said Safi: "There should be a follow-up conversation about what you do with the medieval legacy of how jihad (struggle) is undertaken, rather than saying these things are never a part of Islam."