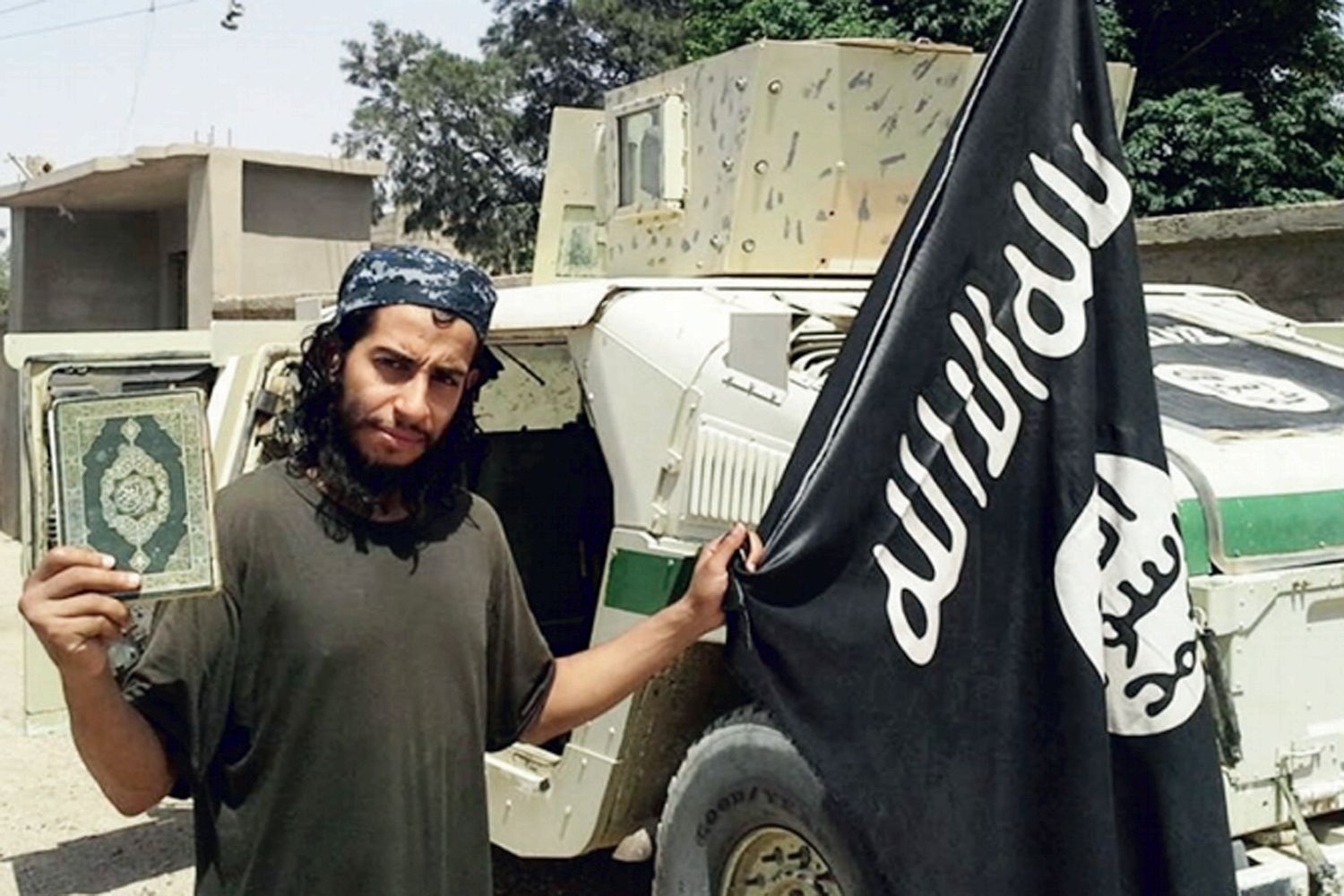 2015 Muslim architect of the Paris massacre loved reading the Qur'an

AND FIGHT in God's cause against those who wage war against you, but do not commit aggression-for, verily, God does not love aggressors. And slay them wherever you may come upon them, and drive them away from wherever they drove you away - for oppression is even worse than killing. And FIGHT not against them near the Inviolable House of Worship unless they FIGHT against you there first; but if they FIGHT against you, slay them: such shall be the recompense of those who deny the truth. - 2:190-191 Note: Muslims are commanded to fight and murder perceived oppressors. Hence, FIGHT against them until there is no more oppression and all worship is devoted to God alone; but if they desist, then all hostility shall cease, save against those who [willfully] do wrong. - 2:193 Note: Muslims are to fight until all worship is devoted to Allah. FIGHTING is ordained for you, even though it be hateful to you; but it may well be that you hate a thing the while it is good for you, and it may well be that you love a thing the while it is bad for you: and God knows, whereas you do not know. - 2:216 Note: Muslims are ordained to fight by Allah. FIGHT, then, in God's cause, and know that God is all-hearing, all-knowing. - 2:244 Note: Muslims are commanded to fight in the cause of Allah. [but] these can never inflict more than a passing hurt on you; and if they FIGHT against you, they will turn their backs upon you [in flight], and will not be succoured. - 3:111 Note: Muslims believe their enemies will retreat without receiving help. Hence, let them FIGHT in God's cause - all who are willing to barter the life of this world for the life to come: for unto him who FIGHTs in God's cause, whether he be slain or be victorious, We shall in time grant a mighty reward. - 4:74 Note: Muslims believe Allah will reward them for fighting. Those who have attained to faith FIGHT in the cause of God, whereas those who are bent on denying the truth FIGHT in the cause of the powers of evil. FIGHT, then, against those friends of Satan: verily, Satan's guile is weak indeed! - 4:76 Note: Faithful Muslims will fight for Allah. ART THOU NOT aware of those who have been told, "Curb your hands, and be constant in prayer, and render the purifying dues"? But as soon as FIGHTing [in God's cause] is ordained for them, lo, some of them stand in awe of men as one should stand in awe of God - or in even greater awe - and say, "O our Sustainer! Why hast Thou ordained FIGHTing for us? If only Thou hadst granted us a delay for a little while!" Say: "Brief is the enjoyment of this world, whereas the life to come is the best for all who are conscious of God - since none of you shall be wronged by as much as a hair's breadth. - 4:77 Note: Muslims are not to enjoy this world as fighting is ordained for them. FIGHT thou, then, in God's cause - since thou art but responsible for thine own self - and inspire the believers to overcome all fear of death. God may well curb the might of those who are bent on denying the truth: for God is stronger in might, and stronger in ability to deter. - 4:84 Note: Muslims are to encourage each other to fight. Qur'an 4:89: They desire that you should disbelieve as they have disbelieved, so that you might be (all) alike; therefore take not from among them friends until they fly (their homes) in Allah's way; but if they turn back, then seize them and kill them wherever you find them, and take not from among them a friend or a helper.
Note: Muslims are to murder people who left Islam.


Qur'an 4:91: You will find others who desire that they should be safe from you and secure from their own people; as often as they are sent back to the mischief they get thrown into it headlong; therefore if they do not withdraw from you, and (do not) offer you peace and restrain their hands, then seize them and kill them wherever you find them; and against these We have given you a clear authority.
Note: Muslims are to murder people they did not trust.

And FIGHT against them until there is no more oppression and all worship is devoted to God alone. And if they desist-behold, God sees all that they do; - 8:39 Note: Muslims are to continue fighting until everyone worships Allah. O Prophet! Inspire the believers to conquer all fear of death when FIGHTing, [so that,] if there be twenty of you who are patient in adversity, they might overcome two hundred; and [that,] if there be one hundred of you, they might overcome one thousand of those who are bent on denying the truth, because they are people who cannot grasp it. - 8:65 Note: Muslims are to be fearless when fighting. And so, when the sacred months are over, slay those who ascribe divinity to aught beside God wherever you may come upon them, and take them captive, and besiege them, and lie in wait for them at every conceivable place! Yet if they repent, and take to prayer, and render the purifying dues, let them go their way: for, behold, God is much forgiving, a dispenser of grace. - 9:5 Note: Muslims are to murder anyone who worships anyone other than Allah. But if they break their solemn pledges after having concluded a covenant, and revile your religion, then FIGHT against these archetypes of faithlessness who, behold, have no [regard for their own] pledges, so that they might desist [from aggression]. - 9:12 Note: Muslims are to fight against those who mock Islam. FIGHT against them! God will chastise them by your hands, and will bring disgrace upon them, and will succour you against them; and He will soothe the bosoms of those who believe, - 9:14 Note: Allah will aid Muslims who fight against the infidels. [And] FIGHT against those who - despite having been vouchsafed revelation [aforetime] -do not [truly] believe either in God or the Last Day, and do not consider forbidden that which God and His Apostle have forbidden, and do not follow the religion of truth [which God has enjoined upon them] till they [agree to] pay the exemption tax with a willing hand, after having been humbled [in war]. - 9:29 Note: Muslims will keep fighting until the infidels pay the exemption tax. BEHOLD, God has bought of the believers their lives and their possessions, promising them paradise in return, [and so] they FIGHT in God's cause, and slay, and are slain: a promise which in truth He has willed upon Himself in [the words of] the Torah, and the Gospel, and the Qur'an. And who could be more faithful to his covenant than God? Rejoice, then, in the bargain which you have made with Him: for this, this is the triumph supreme! - 9:111 Note: Muslims are promised paradise for fighting. O you who have attained to faith! FIGHT against those deniers of the truth who are near you, and let them find you adamant; and know that .God is with those who are conscious of Him. - 9:123 Note: Muslims are to fight against their neighbors who are Christians.
Qur'an 17:33: And do not kill any one whom Allah has forbidden, except for a just cause, and whoever is slain unjustly, We have indeed given to his heir authority, so let him not exceed the just limits in slaying; surely he is aided.
Note: Mo-ham-mad taught Muslims to murder people if they thought it was a just cause.

NOW THOSE who have attained to faith say, “Would that a revelation [allowing us to FIGHT] was bestowed from on high!” But now that a revelation clear in and by itself, mentioning war, has been bestowed from on high, thou canst see those in whose hearts is disease look­ing at thee, [O Muhammad,] with the look of one who is about to faint for fear of death! And yet, far better for them would be - 47:20 Note: Fighting is a revelation from heaven for Muslims. Fear is a disease. AND SO, [when you FIGHT in a just cause,] do not lose heart and [never] beg for peace: for, seeing that God is with you, you are bound to rise high [in the end]; and never will He let your [good] deeds go to waste. - 47:35 Note: Muslims believe that fighting is good. God only forbids you to turn in friendship towards such as FIGHT against you because of [your] faith, and drive you forth from your homelands, or aid [others] in driving you forth: and as for those [from among you] who turn towards them in friendship; it is they, they who are truly wrongdoers! - 60:9 Note: Muslims do not believe in forgiveness. Verily, God loves [only] those who FIGHT in His cause in [solid] ranks, as though they were a building firm and compact. - 61:4 Note: Allah loves only Muslims who fight together.