(How to become unproductive in this lifetime) 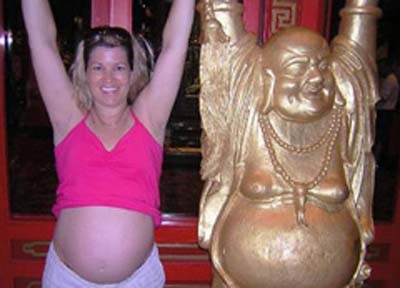 Be fat or pregnant and happy!

Can you earn Nirvana?

Christian Critique of A Daily Dose of Dharma

Why is the Dalai Lama seeking Western Medical Help?

Buddhism, pronounced BU dihz uhm or BOO dihz uhm, is one of the major religions of the world. It was founded in about 500 B.C., or shortly afterward, by a teacher called Buddha. At various times, Buddhism has been a dominant religious, cultural, and social force in most of . In each area, Buddhism has combined with elements of other religions, such as Hinduism and Shinto. Today, Buddhism has about 350 million followers. Most live in , the mainland nations of Southeast Asia, and .

The beliefs of Buddhism

Note: Jesus Christ was not impressed with Buddha.

Buddha probably was born sometime during the 500's or 400's B.C. in southwestern . His real name was Siddhartha Gautama. According to later Buddhist accounts, he was a member of a rich and powerful family. At the age of about 29, Gautama became overwhelmed with the conviction that life was filled with suffering and unhappiness. This conviction led Gautama to abandon his wife and infant son and to seek religious enlightenment as a wandering monk.

After traveling throughout northeastern for about six years, Gautama experienced enlightenment. He believed he had discovered why life was filled with suffering and how people could escape from this unhappy existence. After others learned of his discovery, they called him Buddha, which means Enlightened One.

Note: Buddha taught that you can save yourself to a better beyond.

Ephesians 2:8-10 For by grace you have been saved through faith, and that not of yourselves; it is the gift of God, not of works, lest anyone should boast. For we are His workmanship, created in Christ Jesus for good works, which God prepared beforehand that we should walk in them.


The dharma. Buddha preached that existence was a continuing cycle of death and rebirth. Each person's position and well-being in life was determined by his or her behavior in previous lives. For example, good deeds may lead to rebirth as a wise and wealthy person or as a being in heaven. A person's evil deeds may lead to rebirth as a poor and sickly person or even in hell.

Note: Christianity teaches that there is not a continual cycle of deaths and births.

Hebrews 9:27-28  And as it is appointed for men to die once, but after this the judgment, so Christ was offered once to bear the sins of many. To those who eagerly wait for Him He will appear a second time, apart from sin, for salvation.

Buddha also taught that as long as individuals remain within the cycle of death and rebirth, they can never be completely free from pain and suffering. Buddha said people could break out of the cycle by eliminating any attachment to worldly things. By ridding themselves of such attachment, people would gain a kind of perfect peace and happiness. Buddha called this state of peace and happiness nirvana. According to Buddha, those who are willing and able to follow the and the Noble Eightfold Path will conquer their attachment to worldly things and thus achieve nirvana.

The is a way of life that avoids both the uncontrolled satisfaction of human desires and the extreme forms of self-denial and self-torture.

Note: Buddhism denies that Jesus Christ is the truth.

The Noble Eightfold Path consists of knowledge of the truth; the intention to resist evil; saying nothing to hurt others; respecting life, morality, and property; holding a job that does not injure others; striving to free one's mind of evil; controlling one's feelings and thoughts; and practicing proper forms of concentration.

Note: Buddhism has never produced much good in the world.

John 15:5-8 “I am the vine, you are the branches. He who abides in Me, and I in him, bears much fruit; for without Me you can do nothing. If anyone does not abide in Me, he is cast out as a branch and is withered; and they gather them and throw them into the fire, and they are burned. If you abide in Me, and My words abide in you, you will ask what you desire, and it shall be done for you. By this My Father is glorified, that you bear much fruit; so you will be My disciples.”
Note: Only disciples of Jesus Christ produce lasting good in the world.

The sangha. The word sangha sometimes refers to the ideal Buddhist community, which consists of those who have reached the higher stages of spiritual development. The word also refers to the order of Buddhist monks and nuns. In addition, the term means the community of monks, nuns, and laity.

Note: To do good to others you must be around people so that good can be done.

The order of monks has always had a special role within the sangha. It has played an important part in preserving and spreading Buddhism. In many Buddhist groups, the discipline of monastic life is considered essential to those who seriously seek nirvana. In most Buddhist countries, monks are expected to live a life of poverty, meditation, and study. Monks are also expected to avoid sexual activity.

Some Buddhists become monks for life, but others serve in the sangha for only short periods of time. The monks wear special robes and are a common sight in all Buddhist countries.

The laity also has an important role in the life of the sangha. Members are expected to honor Buddha, to follow basic moral rules, and to support the monks. They are also expected to pay special honor to images of Buddha and to objects that are associated with him.

Many of the laity have influenced the history of Buddhism. During the 200's B.C., Ashoka, an Indian emperor, supported Buddhism. Ashoka established a tradition that has led to close relations between religion and government in many Buddhist countries. In 1956, B. R. Ambedkar, an Indian layman, led a mass conversion that brought more than 1 million former Hindus in into the sangha.

Various Buddhist schools developed in and in other Asian countries, including the Theravada, the Mahayana, the Mantrayana, and Zen. They have much in common but also differ in important ways.

The Theravada. The word theravada means Way of the Elders. The Theravada school is the only one of the early Buddhist schools that has survived. Today, it is the dominant religious tradition in , , , , and .

Note: Buddhist countries are all dictatorial in nature reflecting the Buddhist religion.

The Theravadans emphasize the importance of Buddha as a historical figure, the virtues of the monastic life, and the authority of the Tripitaka. For them, the ideal Buddhist is a kind of saint called an arhat. Mahayanists and others have often referred to the Theravada and similar schools as Hinayana, a term that means lesser vehicle. However, the Theravadans do not accept this name.

The Mahayanists encourage everyone to follow the ideal of the bodhisattva. A bodhisattva is a person who vows to become a Buddha by leading a life of virtue and wisdom. At the highest level, a bodhisattva is one who postpones entering into nirvana in order to work to relieve suffering through acts of love and compassion.

The Mantrayana. The word mantrayana means sacred recitation vehicle. The school's major centers are in the Himalayan regions, in , and in . The Japanese call it Shingon. Mantrayana Buddhism accepts most Mahayanan doctrines. But it also emphasizes a close relationship between a spiritual leader, sometimes called a guru, and a small group of disciples. The disciples spend much time reciting spells called mantras, performing sacred dances and gestures, and meditating. Some branches of the school, particularly in , stress sexual symbolism and believe that sex should be used for holy purposes. Many followers of Mantrayana Buddhism believe in terrifying devils, goblins, and other deities. Attempts to visualize these deities, and the use of magic, play a large part in the school's teachings and rituals. The followers of Mantrayana Buddhism traditionally keep many of their beliefs and practices secret from outsiders.

Zen is practiced chiefly in . It originated in , where it is called Chan. Zen accepts most Mahayanan doctrines and emphasizes a close relationship between a master and his disciples. However, Zen has developed distinctive practices that are designed to lead to a state of spiritual enlightenment called satori. Many followers of Zen believe that satori comes in a sudden flash of insight. Others believe that satori must be achieved gradually through a long process of self-discipline, meditation, and instruction.

Bercholz, Samuel, and Kohn, S. C., eds.Entering the Stream: An Introduction to the Buddha and His Teachings. Shambhala, 1993.

Ganeri, Anita.What Do We Know About Buddhism?  Bedrick, 1997. Younger readers.