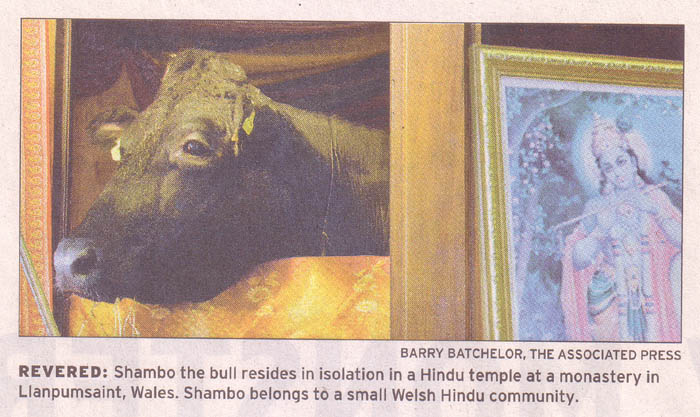 Fight to save sacred bull Shambo

British law says any bull suspected of having bovine tubercolosis must be slaughtered. The caretakers disagree.

LONDON - Those caring for him at a Hindu monastery in Wales say he symbolizes the sanctity of all life and is an inspiration to templegoers. Officials say he could have a contagious disease and should be put down.

Now the fate of Shambo, the sacred bull, is in the hands of Welsh justice.

The 6-year-old Friesian bull tested positive for bovine tuberculosis in April. Under British law, animals suspected of carrying the disease must be slaughtered. But Shambo's caretakers at Skanda Vale Hindu monastery near Carmarthen, in southwest Wales, backed by worldwide supporters, say Shambo is not sick and have been fighting to save him.

The temple brought its case before the Cardiff Civil Justice Center on Thursday, arguing that their religious rights were being violated. Judge Gary Hickinbottom said he would rule on Shambo's case on Monday.

After a notice in early May that regional authorities intended to have Shambo slaughtered, the bull was isolated in a hay-filled shrine in the monastery's main temple. An Internet petition was launched, and the temple created a blog listing Shambo's daily thoughts, paired with a live Web cam dubbed "Moo Tube."

Shambo is one of a herd of cows at a 115-acre estate belonging to the monastery, also known as the Community of the Many Names of God.

The monastery has fiercely defended the animal, arguing that the tuberculosis test was inconclusive and that, even if Shambo were sick, he could be treated rather than killed.

The Welsh rural development minister, Jane Davidson, argued that the tuberculosis tests were accurate in 99.9 percent of all cases and that even healthy looking cattle might be sick or even contagious.

"I have ... considered extremely carefully whether the rights of the community to manifest their religion should override the duty on me to protect animal and human health," she said in a letter to the Welsh Assembly last month. "In the light of the veterinary, medical and legal assessments, I am minded to conclude that they should not."

The monastery said in a Web statement that its members would be "willing to defend his life with our own."

Another Hindu leader urged understanding on both sides.

"If there is good evidence of a genuine case of tuberculosis, which is then a danger to others, ... then you have to let go," said Anil Bhanot, the general secretary of Hindu Council UK. "It is the body that is dying, not the atma (soul) - that is not perishable."