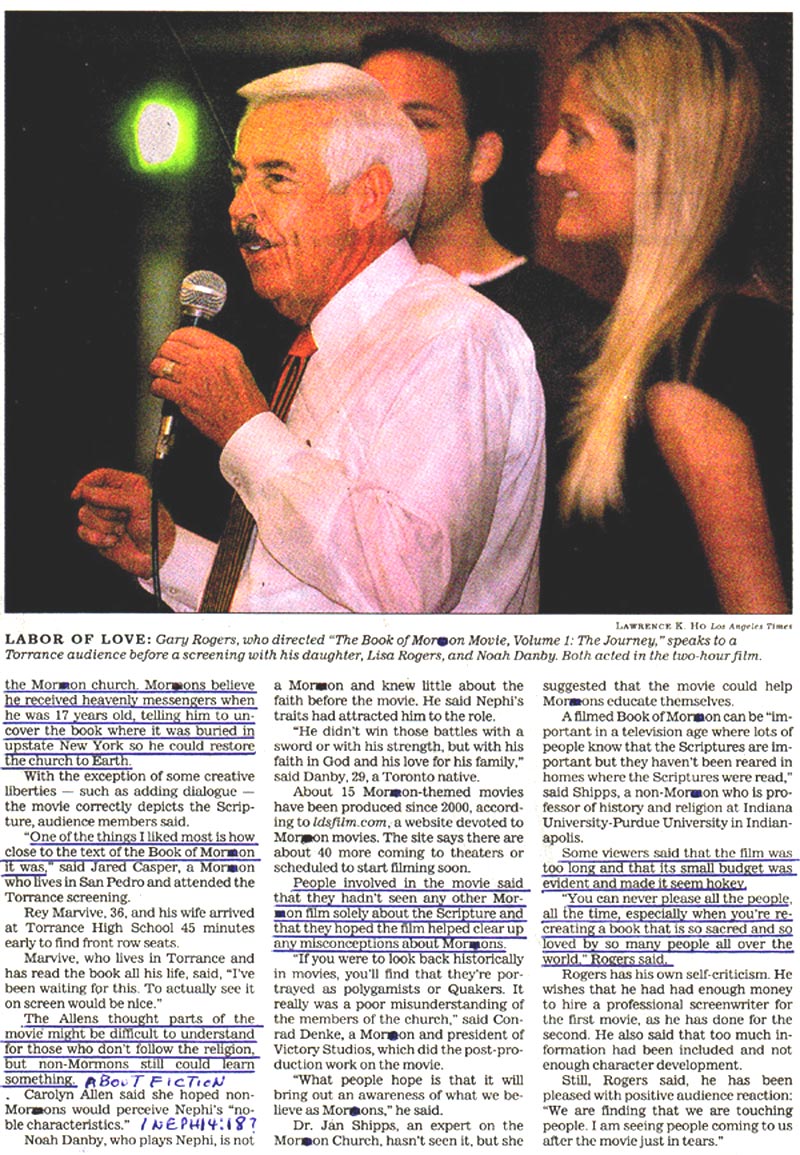 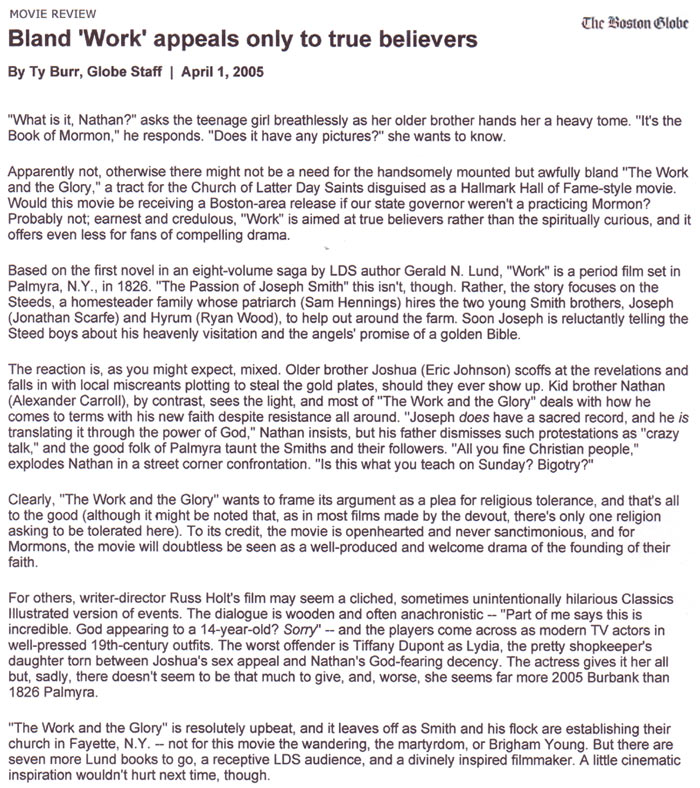 The Work and the Glory: American Zion (2 stars out of 5)

American Zion is the second film in the Latter Day cinema series, The Work and the Glory, about the early history of the Mormon Church. It details the fictional rifts in the Steed family, New York farmers torn apart by some members' embracing of neighbor Joseph Smith's claims that he's a prophet of a new faith.

American Zion follows the Steeds -- patriarch and reluctant-to-turn-Mormon Ben (Sam Hennings); his Mormon son Nathan (Alexander Carroll) and his prodigal son, the faithless gambler Joshua (Eric Johnson); and the Smiths -- Jonathan Scarfe plays Joseph -- as they search for the Promised Land in the 1830s.

Zion, Smith tells his followers, is the city the Lord will build (through Mormons) in North America, where "we will all be of one heart and one mind." He just can't seem to find it on the map.

Hounded out of New York state, tarred and feathered in what was supposed to be Zion -- Kirtland, Ohio -- and further hassled in Missouri, Smith fast-tracks his branch of nascent Christianity 1,200 years straight past pacifism and turning the other cheek to the Crusades. He raises a private army to go and get Mormon land back.

Fascinating material on many levels. But what could have been an involving and tortured journey of a flexible faith and the troubling history of Smith, his church and rural America's reaction to it, is a flat and unemotional affair that deflates just when it should grow more tense and exciting.

Sterling Van Wagenen, a producer (The Trip to Bountiful) and director who used to run the film program at the University of Central Florida, returns to directing with this, a movie with a nice sense of its era, but dully acted by blank-faced players playing blase characters. It's a movie totally without pace or a sense of drama.

The film never quite proselytizes, as it sets up the new church as a true faith, glossing over the fuzzy founding story detailed in the first Work and the Glory film. Here, Mormons are the devout chosen, upright, hard-working (white) men, women smiling beatifically at their swelling bellies, a church of abolitionists set upon by racists, slaveholders and book burners. History backs up much of that.

But martyrs or not, there is no emotional heat to the many times Ben flatly drones, "They're tearing this family apart." Even the uplifting hymns or cruel hardships of their persecution fail to move.

Scarfe is emblematic of the movie's problems. He can't play his neo-crucifixion, Smith's tar-and-feathering, with conviction. He wanly fake-struggles through what had to be a wrenching experience.

There's another movie in this series on the way, A House Divided. But unless the filmmakers can heighten the drama (this was filmed and rushed through editing) and ratchet up the emotion, these movies should go straight to video, or a Mormon church near you. They aren't effective outreach, or entertaining drama.

The rap against most Mormon-themed movies is there isn't much in them about Mormonism, just mild jokes about the culture.

Orphaned siblings Kerra and Brock McConnell (played by Summer Naomi Smart and Brian Kary), ages 16 and 11, are on the run from social workers and L.A. gang members, opting to hide out with relatives of their long-missing father in Leeds, Utah.

Kerra remembers the woods outside the McConnell farm, where she once played with an imaginary friend named Kidonni. Returning to those woods, Kerra finds Kidonni (Moronai Kanekoa), now an adult, is quite real - a Nephite warrior. She also discovers the woods contain a portal that links modern Utah with the jungles of ancient America near the Nephites' capital of Zarahemla. Kerra reads up on the Nephites, via the Book of Mormon, while Kidonni prepares for an invasion from the evil Gadianton Robbers. But as the portal widens, suddenly the Gadiantons are running amok in Leeds, too.

Heimerdinger, best known for his "Tennis Shoes Among the Nephites" books, makes a few rookie mistakes - adding one song-driven montage too many, or occasionally getting too cute with the editing. But he squeezes a lot of visual flair from a minuscule budget, and laces his adventure with bits of comedy (like when the Gadiantons try to raid a mini-mart) and lots of warmth.

To his great credit, Heimerdinger explains Mormon beliefs to a potential crossover audience without watering down the LDS message. Not since Richard Dutcher's "God's Army" has a movie balanced its Mormonism and its entertainment value so well.