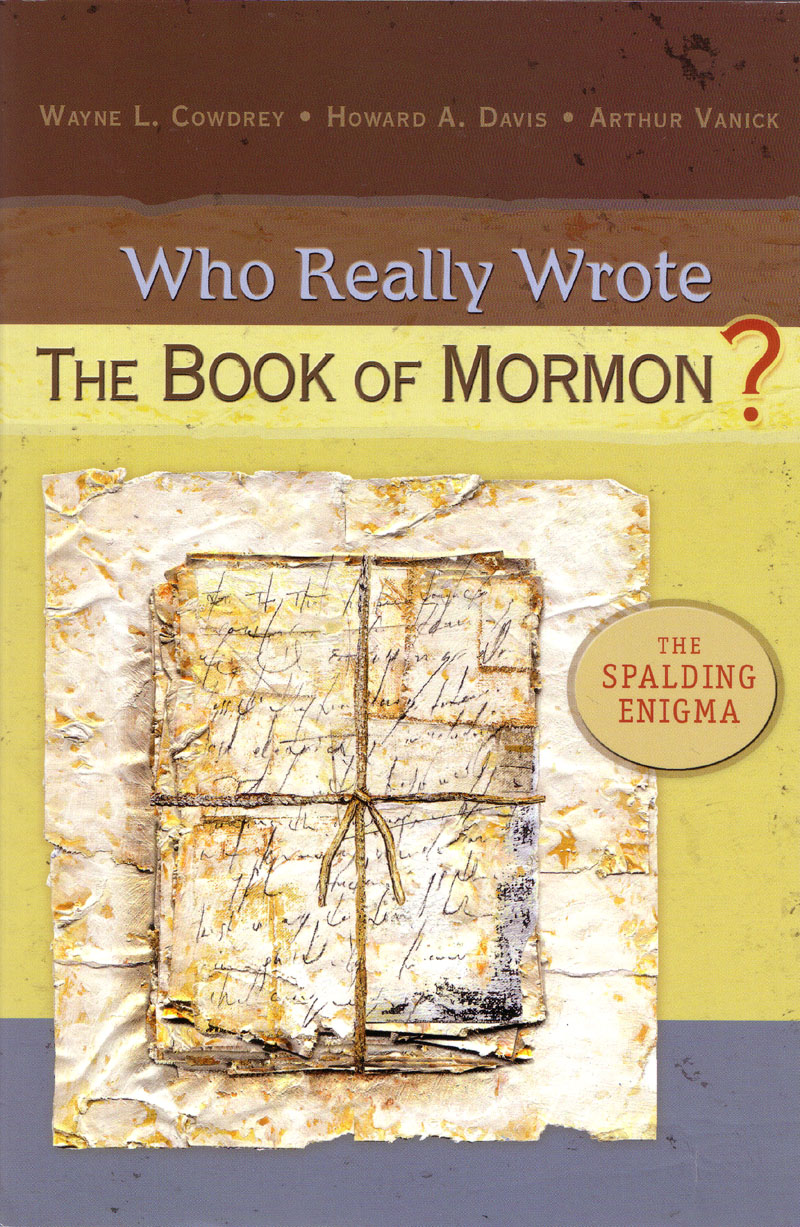 Who Really Wrote The Book of Mormon? by Wayne L. Cowdrey, Howard A. Davis, and Arthur Vanick

Appendix 5 - The Cephas Dodd Hoax and Other Fabrications

Exploring the historical origins of a major religion is always a tricky business. Take Mormonism for example. If you happen to be a Latter-day Saint, you no doubt accept The Book of Mormon as a divinely inspired text revealed to prophet Joseph Smith Jr. in 1827 by an angel named Moroni. On the other hand, those not of the Mormon persuasion generally know little or nothing about the religion itself or its sacred book, which Mormons believe enjoys equal footing with the Holy Bible. Every person of faith, however, ought to be righteously concerned when historians turn up facts about a religion which seem to contradict those that have previously passed for truth. In the words of John Dominic Crossan, "you can have history without faith, but you cannot have faith without history."

One should not therefore be too surprised to learn that some professing Mormons have recently been troubled by the appearance of a scholarly new study which painstakingly dissects the historical origins of their revered text, and dares to conclude that the real story of events leading up to the publication of The Book of Mormon in 1830 fails to support the claims made for it by its modern proponents. The work in question is "Who Really Wrote The Book of Mormon: The Spalding Enigma," by Wayne Cowdrey, Dr. Howard Davis and Arthur Vanick, recently published by Concordia, the highly respected publishing arm of the Lutheran Church - Missouri Synod.

Lest anyone be misled, this is a scholarly undertaking, not a religious work. One finds little discussion here about Mormon theology, either pro or con. Rather, its scope has been strictly limited to an in-depth examination of the people and circumstances surrounding the forthcoming of The Book of Mormon itself. The result raises serious and very troubling questions about what currently passes for the official history of those who style themselves Latter-day Saints.

According to this study, The Book of Mormon is really a clever adaptation of an obscure, unpublished novel written during the War of 1812 by a down-and-out ex-preacher named Solomon Spalding, a Revolutionary War veteran and bankrupt land speculator who died at Amity, PA., in 1816 and lies buried in the churchyard there. Prior to his death, Spalding had complained to friends and relatives that a draft of his novel, "A Manuscript Found," had been stolen from the shelves of Pittsburgh, PA., publisher R. & J. Patterson, by one Sidney Rigdon. This same Rigdon later became one of the three principal founders of the Mormon religious movement, joining Joseph Smith, Jr., and Smith's cousin Oliver Cowdery, an itinerant book peddler and occasional printer of questionable background. Evidence indicates it all began as an elaborate get-rich-quick scheme which Smith himself referred to in 1829 as "the Gold-Bible business."

At the time of the alleged conspiracy, Smith and Cowdery lived in western New York. Rigdon resided in the Pittsburgh area until 1818, and then spent the next dozen years in various locations around western Pennsylvania and eastern Ohio. It was Cowdery who eventually brought Rigdon and Smith together, and then later served as Smith's personal scribe during the process of creating The Book of Mormon from Spalding's manuscript. Co-author Wayne L. Cowdrey, an ex-Mormon, is Oliver Cowdery's second cousin five generations removed, and has been privately accumulating research on his family's involvement in Mormonism for more than three decades.

Although questions concerning Solomon Spalding, Sidney Rigdon, and the origin of The Book of Mormon have persisted for many years, Mormon historians have always dismissed them by arguing that Spalding died in 1816 and that Rigdon therefore could not have known him since he did not arrive in Pittsburgh until 1822. However, as co-author Dr. Howard Davis points out, "Documentary evidence published for the first time in our study, clearly establishes that Rigdon was well-known in Pittsburgh as early as 1812 and that he and other members of his family regularly received mail at the local Post Office, as did Solomon Spalding."

According to "Who Really Wrote... ," Oliver Cowdery first introduced Sidney Rigdon to Joseph Smith in 1826. Over the next four years, these men secretly conspired to create The Book of Mormon which was finally published in 1830. Shortly afterwards, Smith and Cowdery founded the religious organization now known as The Church of Jesus Christ of Latter-day Saints, which was headed by Smith as "President, Prophet, Seer and Revelator" until his brutal assassination by an irate Illinois mob in 1844.

Upon reading this study, historian Dale R. Broadhurst, an ex-Mormon and a recognized authority on the origins of the Latter-day Saints, said that it "brings the historical study of Mormon origins to an entirely new level."

Was The Book of Mormon created from Solomon Spalding's work of fiction, or was it really given to Joseph Smith by an angel as alleged? Based upon evidence presented in this 560-page report, the former explanation now seems far more likely.