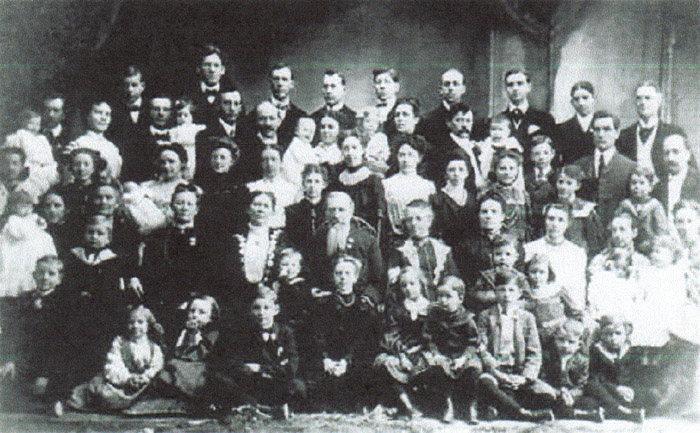 Joseph Fielding Smith the blasphemer and polygamist living in open violation of United States laws and the LDS 1890 official declaration.

Joseph F. Smith, Gospel Doctrine, p.18 There is no perfect estate but that of the risen Redeemer, which is God's estate, and no man can become perfect except he become like the Gods (1). And what are they like? I have shown what Christ is like, and he is like his Father, but I will refer to an undoubted authority to this people, on this point: "The Father has a body of flesh and bones as tangible as man's (2); the Son also; but the Holy Ghost has not a body of flesh and bones, but is a personage of Spirit, were it not so, the Holy Ghost could not dwell in us." (D and C, Sec. 130.)

(1) Correction: There is only one true God throughout eternity.

1 Chronicles 17:20 "O LORD, there is none like You, nor is there any God besides You, according to all that we have heard with our ears."

(2) Correction: The Father does not have a body of flesh.

Journal of Discourses, Vol.21, p.10, Joseph F. Smith, December 7th, 1879 And as he has here stated, as having come from the mouth of the Prophet, this doctrine of eternal union of husband and wife, and of plural marriage, is one of the most important doctrines ever revealed to man in any age of the world. Without it man would come to a full stop; without it we never could be exalted to associate with and become gods, neither could we attain to the power of eternal increase, or the blessings pronounced upon Abraham, Isaac and Jacob, the fathers of the faithful.

Correction: Faithful believers will not be Gods but will be like angels in the life to come.

Mark 12: 18-25 Then some Sadducees, who say there is no resurrection, came to Him; and they asked Him, saying: "Teacher, Moses wrote to us that if a man's brother dies, and leaves his wife behind, and leaves no children, his brother should take his wife and raise up offspring for his brother. Now there were seven brothers. The first took a wife; and dying, he left no offspring. And the second took her, and he died; nor did he leave any offspring. And the third likewise. So the seven had her and left no offspring. Last of all the woman died also. Therefore, in the resurrection, when they rise, whose wife will she be? For all seven had her as wife." Jesus answered and said to them, "Are you not therefore mistaken, because you do not know the Scriptures nor the power of God? For when they rise from the dead, they neither marry nor are given in marriage, but are like angels in heaven."

Collected Discourses, Vol.3, Joseph F. Smith, September 3, 1892 Joseph laid down his life for those principles. His name is inscribed upon the scroll that never can be destroyed. He lives in the hearts (1) of the Latter-day Saints. His memory lives among the (2) Gods. His name (3) is known wherever the sound of the true gospel has been heard. His name so revered by thousands and thousands of honest people.

(1) Correction: The Holy Spirit dwells in the hearts of the true saints of God.

2 Corinthians 1: 21-22 Now He who establishes us with you in Christ and has anointed us is God, Who also has sealed us and given us the Spirit in our hearts as a deposit.

(2) Correction: There is only one true God throughout eternity.

(3) Correction: The true gospel is always associated with the name of Jesus.

Acts 4:12 Nor is there salvation in any other, for there is no other name under heaven given among men by which we must be saved.

Romans 1:16 For I am not ashamed of the gospel of Christ, for it is the power of God to salvation for everyone who believes, for the Jew first and also for the Greek.