THE MESSAGE FROM THE CROSS 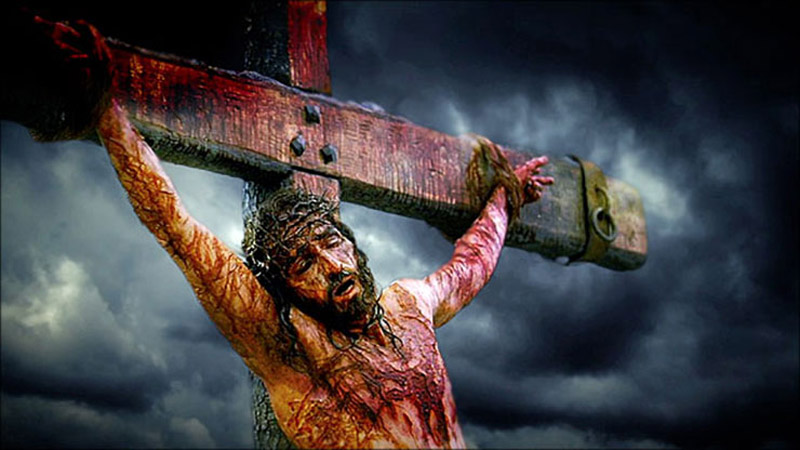 Mark 15:25-32 Now it was the third hour, and they crucified Him. And the inscription of His accusation was written above: THE KING OF THE JEWS. With Him they also crucified two robbers, one on His right and the other on His left. So the Scripture was fulfilled which says, “And He was numbered with the transgressors.” And those who passed by blasphemed Him, wagging their heads and saying, “Aha! You who destroy the temple and build it in three days, save Yourself, and come down from the cross!” Likewise the chief priests also, mocking among themselves with the scribes, said, “He saved others; Himself He cannot save. Let the Christ, the King of Israel, descend now from the cross, that we may see and believe.”

Application: Will you forgive others for their mockery of you?

Luke 23:39-45 Then one of the criminals who were hanged blasphemed Him, saying, “If You are the Christ, save Yourself and us.” But the other, answering, rebuked him, saying, “Do you not even fear God, seeing you are under the same condemnation? And we indeed justly, for we receive the due reward of our deeds; but this Man has done nothing wrong.” Then he said to Jesus, “Lord, remember me when You come into Your kingdom.” And Jesus said to him, “Assuredly, I say to you, today you will be with Me in .” Now it was about the sixth hour, and there was darkness over all the earth until the ninth hour. Then the sun was darkened, and the veil of the temple was torn in two.

Application: Have you put your entire trust in Jesus Christ for eternal life?

Note: Jesus Christ as true Man suffered for the sins of the world. (2:45pm)

Matthew 27:45-49 Now from the sixth hour until the ninth hour there was darkness over all the land. And about the ninth hour Jesus cried out with a loud voice, saying, “Eli, Eli, lama sabachthani?” that is, “My God, My God, why have You forsaken Me?” Some of those who stood there, when they heard that, said, “This Man is calling for Elijah!” Immediately one of them ran and took a sponge, filled it with sour wine and put it on a reed, and offered it to Him to drink. The rest said, “Let Him alone; let us see if Elijah will come to save Him.”

Application: Do you realize how much Jesus Christ suffered for your sins?

Note: Jesus Christ fulfilling the O.T. law made provision for His mother. (2:50pm)

Application: Are you taking care of people that God has put in your trust?

John 19:28-29 After this, Jesus, knowing that all things were now accomplished, that the Scripture might be fulfilled, said, “I thirst!” Now a vessel full of sour wine was sitting there; and they filled a sponge with sour wine, put it on hyssop, and put it to His mouth.

Application: Do you believe that Jesus Christ is true God and true Man?

Note: Jesus Christ paid for all the sins of the world on the cross. (3:00pm)

John 19:30 So when Jesus had received the sour wine, He said, “It is finished!” And bowing His head, He gave up His spirit.

Application: Do you believe that Jesus Christ died for your sins?

Luke 23:46-49 And when Jesus had cried out with a loud voice, He said, “Father, ‘into Your hands I commit My spirit.’” Having said this, He breathed His last. So when the centurion saw what had happened, he glorified God, saying, “Certainly this was a righteous Man!” And the whole crowd who came together to that sight, seeing what had been done, beat their breasts and returned. But all His acquaintances, and the women who followed Him from , stood at a distance, watching these things.

Application: Have you put your entire trust in God the Father for eternal life?

1 Corinthians 1:17-18 For Christ did not send me to baptize, but to preach the gospel, not with wisdom of words, lest the cross of Christ should be made of no effect. For the message of the cross is foolishness to those who are perishing, but to us who are being saved it is the power of God.

1 Corinthians 1:22-24 For Jews request a sign, and Greeks seek after wisdom; but we preach Christ crucified, to the Jews a stumbling block and to the Greeks foolishness, but to those who are called, both Jews and Greeks, Christ the power of God and the wisdom of God.

Colossians 1:19-23 For it pleased the Father that in Him all the fullness should dwell, and by Him to reconcile all things to Himself, by Him, whether things on earth or things in heaven, having made peace through the blood of His cross. And you, who once were alienated and enemies in your mind by wicked works, yet now He has reconciled in the body of His flesh through death, to present you holy, and blameless, and above reproach in His sight—if indeed you continue in the faith, grounded and steadfast, and are not moved away from the hope of the gospel which you heard, which was preached to every creature under heaven, of which I, Paul, became a minister.

FULLFILLMENT OF PASSOVER BY JESUS CHRIST THE LAMB OF GOD
The sacrificial animal, which was either a lamb or goat, was necessarily a male, one year old, and without blemish. Each family or society offered one animal together, which did not require the "semikah" (laying on of hands), although it was obligatory to determine who were to take part in the sacrifice that the killing might take place with the proper intentions. Only those who were circumcised and clean before the Law might participate, and they were forbidden to have leavened food in their possession during the act of killing the paschal lamb. The animal was slain on the eve of the Passover, on the afternoon of the 14th of Nisan, after the Tamid sacrifice had been killed, i.e., at three o'clock. Wikipedia Encyclopedia.