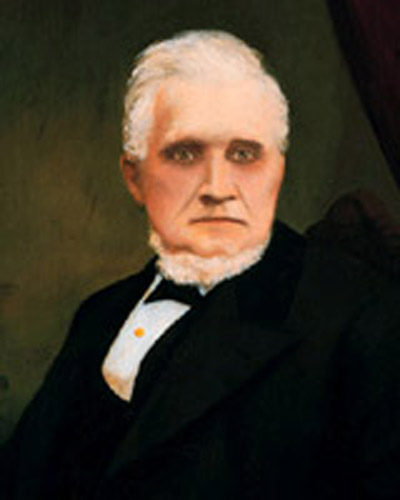 John Taylor's sermon on his perception of the superiority of Mormonism over Christianity - June 12, 1853

John Taylor's sermon on his treason and hatred of the United States of America - August 23, 1857

John Taylor's sermon on his treason and the kingdom of God - November 1, 1857 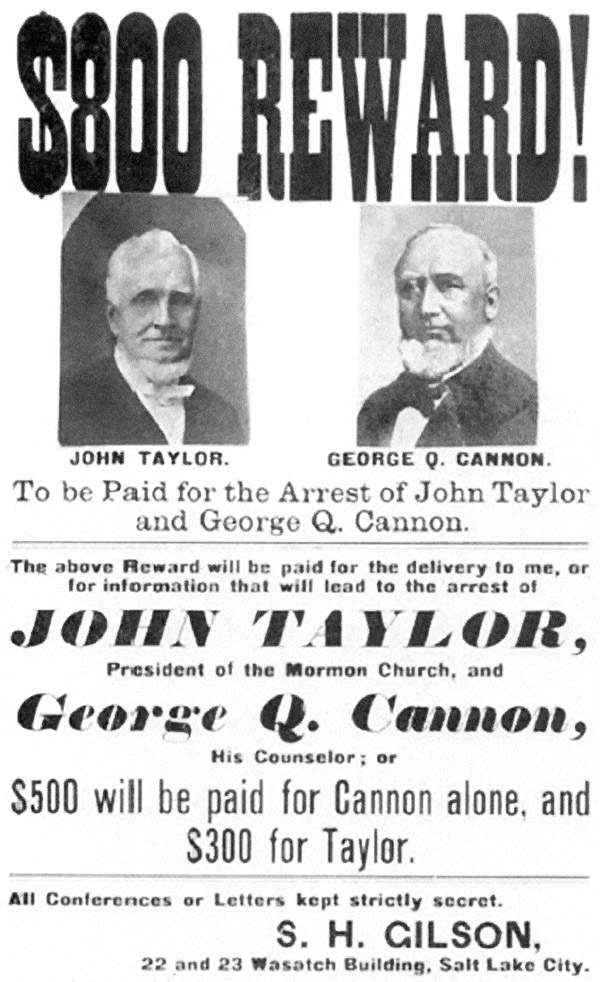 John Taylor, The Gospel Kingdom, p.20-21 We have no craven fear of death; we are looking for life eternal, and an association with the Gods in celestial mansions. We are not ashamed of our religion, and we believe God is not ashamed of us. The Mormon, March 31, 1855.

Isaiah 43:10 "You are My witnesses," says the LORD, "And My servant whom I have chosen, that you may know and believe Me, and understand that I am He. Before Me there was no God formed, nor shall there be after Me.

John Taylor, The Gospel Kingdom, p.3 The omnipotent power of eternal truth will stand unscathed in the view of gathering hosts, and the nations will know that God rules in the heavens, that Mormonism is not a vague phantasy and wild chimera, but the greatest boon that could be conferred upon man; the offspring of heaven, the gift of the Gods, a celestial treasure, an earthly, heavenly inheritance, a living, abiding, and eternal reality. The Mormon, Vol. 1, No. 23, July 28, 1855.

Isaiah 44:6 "Thus says the LORD, the King of Israel, And his Redeemer, the LORD of hosts: 'I am the First and I am the Last; Besides Me there is no God.

John Taylor, The Gospel Kingdom, p.14 The principles that we believe in reach back into eternity. They originated with the Gods in the eternal worlds, and they reach forward to the eternities that are to come. JD, 17:206, October 7, 1874.

John Taylor, The Gospel Kingdom, p.27 "THE LIVING GOD" PLURALITY OF GODS. It will . . . be necessary to treat the subject of the "Living God," in contra-distinction to a dead God, or, one that has, "no body, parts, or passions," and perhaps it may be well enough to say at the outset that Mormonism embraces a plurality of Gods as the Apostle Paul said, there were "gods many, and lords many," (1 Corinthians 8:5.) in doing which, we shall not deny the scripture that has been set apart for this world, and allows one God; even Jesus Christ, the very eternal Father of this earth; and if Paul tells the truth "by whom also he made the worlds." (Hebrews 1:2.)

Polytheism: The belief in or worship of more than one God. Webster's Dictionary

Christian: One who professes belief in the teachings of Jesus Christ. Webster's Dictionary

Webmaster Note: Mormons are actually foolishly far from the kingdom of God due to their polytheistic paganism.

So the scribe said to Him, “Well said, Teacher. You have spoken the truth, for there is one God, and there is no other but He. And to love Him with all the heart, with all the understanding, with all the soul, and with all the strength, and to love one’s neighbor as oneself, is more than all the whole burnt offerings and sacrifices.” Now when Jesus saw that he answered wisely, He said to him, “You are not far from the kingdom of God.” Mark 12:32-34.

John Taylor was born in England in 1808. He began his God expert career as a Methodist, but converted to Mormonism in 1836. Taylor rose rapidly in the Church hierarchy, joining its “Twelve Apostles” after only two years. When the Mormons were driven from Missouri after losing a miniature civil war there, he decamped with the rest for Nauvoo, Illinois. There he edited the Nauvoo Neighbor, commenting approvingly on a Mormon technique of dealing with dissidents: smearing them with excrement taken from outhouses. He also inadvertently set in motion the chain of events which led to the death of Mormonism’s founder Joseph Smith, when he proselytized and brought to Nauvoo a Canadian named William Law.

Law was a capable fellow who rose quickly in the Church also, but at the time of his conversion he was unaware of the then-secret Mormon doctrines on polygamy. He found out the hard way, when his wife reported to him that Joseph Smith had tried to seduce her. Law didn’t take this well, nor did he appreciate the hierarchy’s efforts to steer Mormon business away from his own general store and into church-controlled competitors. So he started a newspaper, called the Nauvoo Expositor, the policy of which would be to “censure and decry gross moral imperfections wherever found, either in plebeian, patrician, or self-constituted monarch” (Smith was by that point referring to himself as a king). He also promised to “oppose with uncompromising hostility any union of church and state.”

The first issue of the Expositor was also its last. Mormon thugs, on the order of the hierarchy, invaded its office and smashed the presses. That was the last straw for the Illinois authorities, whose patience was being sorely tested by Smith’s campaign to treat Nauvoo as his personal kingdom. Smith, his brother, and a couple of other top Mormons – including John Taylor – were arrested and jailed in Carthage, Illinois. From jail, Smith summoned his 4,000-man personal army to come and break him free. But before that could happen an angry crowd broke in and murdered Smith and his brother, who had a long history of evading justice, severely wounding Taylor in the process. We are indebted to Taylor, though, for his published reminiscences of himself and Smith guzzling smuggled wine in the Carthage jail until they felt “dull and languid,” contrary to the abstinence they preached to the rest of Mormondom.

In the confusion, Taylor wound up not being tried for his role in the Expositor case. He returned to Nauvoo, where he helped the Church make money – quite literally – as part of a counterfeiting ring. When federal agents descended on Nauvoo seeking his arrest, he fled to England, and later joined Brigham Young in attempting to establish an independent Mormon kingdom in Utah.

While in Utah, Taylor developed his own political theory on the proper relation of church and state, which was quite straightforward: God experts should run the government, the way God intended it to be run. He published a book in 1852, aptly called The Government of God, and in 1857 praised the Utah system: “We used to have a difference between Church and State, but it is all one now. Thank God.”

Utah was brought to heel by a federal army the following year. One might think that a foreign-born criminal like Taylor with such un-American views would not have been allowed to participate in the territorial government, but he was appointed a judge, then elected speaker of the legislature, and then superintendent of Utah public schools. One can only imagine the kind of brainwashing that went on in the schools during Taylor’s regime.

Nevertheless, the hottest issue in Utah at the time was not the schools but polygamy, a federal crime. Taylor spoke out forcefully against it: “We are accused here of polygamy, and actions the most indelicate, obscene, and disgusting … These things are too outrageous to admit of belief,” while quoting from early Mormon scriptures condemning the practice. At the time he spoke, he had 12 wives. That was the Mormon way: brazen lying to shield utter contempt for the law.

Meanwhile, Taylor spent his time trying to change the subject to the ignorance of his Christian persecutors, who did not know nearly as much about God as he did. “[A]re Christians ignorant? Yes, as ignorant of things of God as the brute beast … the devil could not invent a better engine to spread his work than the Christianity of the 19th century. … What does the Christian world know about God? Nothing.” He also set up “Zion’s Central Board of Trade”: a racket of Church-owned businesses whose success was assured by a pulpit-enforced boycott of non-Mormon competitors, blazing the trail for the immense corporate and real estate wealth owned by the Mormon Church today.

By the time Brigham Young died in 1877, Taylor was head of the “Twelve Apostles” who ran the church, which was now more open about polygamy. “We are not ashamed,” he proclaimed, “to declare that we are polygamists … that we are firm, conscientious believers in polygamy, and that it is part and parcel of our religious creed.” Internal bickering kept the presidential post vacated by Young open for three years, but ultimately on October 10, 1880, John Taylor was elected the third president of church, following in Smith’s and Young’s footsteps. He took office at a difficult time: the Supreme Court had just ruled that polygamy was not protected by the First Amendment, national feeling was strongly in favor of “doing something” about Utah, and the opening of the transcontinental railroad made the doing of something about Utah far more practical than it had been in the 1850s. Hundreds of federal polygamy prosecutions followed, especially targeting the Church leaders, who were the ones who could afford to keep the most wives in the first place. Taylor threatened another war: “They who fight against Zion shall be destroyed; and the pit which has been digged shall be filled by those who digged it.” But Utah wasn’t Nauvoo, and when his army failed to materialize, President Taylor ignominiously dropped into hiding.

Taylor was comforted in his hideout by two events. First, a friendly visit from God himself, who gave him a revelation to stand fast on polygamy forever: “I have not revoked this law nor will I, for it is everlasting & those who will enter into my glory must obey the conditions thereof.” Then, putting God’s advice into practice, 78-year old Taylor took on yet another wife, 26-year old Josephine Roueche.

Frustrated at its inability to find Taylor, the federal government passed the Edmunds-Tucker Act, disincorporating the Mormon church as a criminal enterprise and forfeiting most of its vast landholdings. Taylor responded aggressively, with a string of shady deals to transfer Church land titles to accomplices before the government could get its hands on them. He also set up a colony in Mexico for fugitives from justice, where Mitt Romney’s father was born. Taylor died of a heart attack in 1887; I guess Josephine was too much for him.

By 1933, the kinder and gentler Mormon Church was officially denying that the 1886 revelation to John Taylor had ever happened. Today, in official Church histories, Taylor is listed as never having any wives at all.