The date in the heading of the Revelation on the Eternity of the Marriage Covenant, Including the Plurality of Wives, notes the time at which the revelation was committed to writing, not the time at which the principles set forth in the revelation were first made known to the Prophet. This is evident from the written revelation itself which discloses the fact that Joseph Smith was already in the relationship of plural marriage, as the following passage witnesses: "And let mine handmaid, Emma Smith, receive all those that have been given unto my servant Joseph, and who are virtuous and pure before me." There is indisputable evidence that the revelation making known this marriage law was given to the Prophet as early as 1831. History of the Church, Introduction to Volume V, B.H. Roberts, 1951.

When the Prophet Joseph organized the Relief Society at Nauvoo, on the 17th of March, 1842, Sister Eliza R. Snow was appointed to fill the very responsible position of secretary in that most important organization. She was sealed to the Prophet Joseph Smith in the Celestial Order of Marriage, which includes Plurality of Wives, June 29, 1842; being one of the early converts to that doctrine. After the martyrdom of her husband, June 27, 1844, Sister Eliza was prostrated with grief, and besought the Lord with all the fervency of her soul to permit her to follow the Prophet at once, and not leave her in so dark and wicked a world. LDS Biographical Encyclopedia, Volume 1, 1935. Andrew Jenson.

Note: Joseph Smith wanted to keep the doctrine of polygamy to himself.

PLURALITY OF WIVES.-October 5, 1843. "Gave instructions to try those persons who were preaching, teaching, or practising the doctrine of plurality of wives; for, according to the law, I hold the keys of this power in the last days; for there is never but one on earth at a time on whom the power and its keys are conferred; and I have constantly said no man shall have but one wife at a time, unless the Lord directs otherwise." Compendium of the Doctrines of the Gospel; Salt Lake City, Utah; Desert News Company, 1882.

I asked if Joseph Smith died a true prophet. He spoke, "He died a true prophet, Brigham Young is now the man to lead the Church. If you will covenant with me not to reveal it to the world there shall be things revealed to you that shall be greatly to your benefit." I then saw in a vision the beauty and glory of plurality of wives. It said, "Your mother and your sister, Sarah, do not believe in plurality. Almira knows it is right. Tell them what you know and they will all believe you." Writings of Early Latter-day Saints and their Contemporaries, Utah Religious Studies Center, 1996. Milton Blackman and Keith Perkins, editors.

In 1843 the law on celestial marriage was written, but not published and was known only to perhaps one or two hundred persons. It was written from the dictation of Joseph Smith, by Elder William Clayton, his private secretary, who is now in this city. This revelation was published in 1852, read to a general conference, and accepted as a portion of the faith of the Church. Sacred Truths of the Doctrine and Covenants, LEMB Inc., 1982. L.G. Otten and C.M. Caldwell.

Note: Brigham Young lied that the doctrine of polygamy was being taught.

"But," say they, "what of your peculiar doctrine? What did you come to the mountains for? What did you leave us for? We suppose it was on account of your peculiar doctrine." I reply, "Pause! Wait a moment! When we left the confines of what is called civilization the doctrine of plurality of wives was not known by the world, and was not taught by us, and was known only to a very few member of our Church; but since we have declared this revelation we have dwelt in peace and safety, so we were not persecuted for that, sure. We did not leave Ohio, Missouri, Illinois, or any other State or neighborhood within the confines of civilization for believing in the doctrine of a plurality of wives." I say this to all who hear me. I want our young folks to understand this, or they may perhaps grow up with the idea that we were driven from our homes in consequence of our belief in celestial marriage. Journal of Discourses, Volume 14, June 4, 1871.

At a still later date, temple endowments and other ordinances were revealed -- all of which are a necessary prelude to the performance of an eternal marriage, a marriage between one man and one woman, or between one man and more than one women, as the case may be. After these things the practice of celestial marriage, including plurality of wives, was commanded. In 1843 the previously revealed doctrine of celestial marriage (including plurality of wives) was recorded for the first time; added truths were also stated in the revelation as finally recorded, as for instance a reference to the fact that the keys of sealing now had been given and also special instruction to Emma Smith relative to plural marriage. (D. & C. 132:45-47, 51-55.) Mormon Doctrine, Salt Lake City, Bookcraft, 1966.

Note: George Albert Smith advocated the continuance of polygamy in 1886.

While we are considering this subject, we will inquire, did the Saviour in any place that we can read of, in the course of his mission on the earth, denounce a plurality of wives? He lived in a nation of Jews; the law of Moses was in force, plurality of wives was the custom, and thousands upon thousands of people, from the highest to the lowest in the land, were polygamists. The Saviour denounced adultery; he denounced fornication; he denounced lust; also divorce; but is there a single sentence asserting that plurality of wives is wrong? If so, where is it? Who can find it? Why did he not say it was wrong? Journal of Discourses, Volume 13, George Albert Smith.

Note: Parley Pratt places the laws of the land higher than Mormon Doctrine.

The Old and New Testaments, the Constitution and laws (if the United States, and the laws of Utah Territory shall be their standard; and if in all this wide range one item of law can be found wherein God, angels, men, prophets, apostles, the Son of God or the Holy Spirit have made plurality of wives a crime, a transgression of law or an immorality, then, on these conditions, we will renounce Polygamy. But till this is done we shall hold the law of God on the subject of matrimony, including a plurality of wives, as a most sacred institution, binding on our own consciences, in the free exercise of which we claim the protection so freely and fully guaranteed by the constitution of our common country. The Autobiography of Parley P. Pratt, chapter 50.

Note: True Christians are not intimidated by governmental leaders to change doctrines.

Acts 5:29 But Peter and the other apostles answered and said: "We ought to obey God rather than men."

Note: Polygamy was banned in 1890 by a Mormon prophet with a spin.

Section 132, recorded in 1843, authorized the practice of plural marriage. The keys to this practice however, are vested only in the Lord's prophet and used only with divine approbation (D&C 132:7; Jacob 2:30; HC 6:46). Because a Prophet of God, holding these keys, revoked the law of plural marriage in 1890 (see OD-1), the law of the Church at the present time is the same as when section 49 was revealed: "Wherefore, it is lawful that [a man] should have one wife" (D&C 49:16). Doctrine and Covenants Encyclopedia, Salt Lake City, Utah, Bookcraft, 1996.

Note: Utah is granted statehood after polygamy is renounced.

Repeated efforts to achieve statehood were turned aside by the Congress, mainly because of falsehoods and misinformation circulated against the Saints and because of the public opposition [p.616] to the Saints' practice of plural marriage. With the issuance of the Manifesto by Wilford Woodruff, calling an end to polygamy, Congress was more favorable to granting statehood for Utah. This became a reality on January 4, 1896, when the whittled-down Territory of Utah (now only 84, 916 square miles) became the forty-fifth state of the Union. (SLS, 413-18.) Doctrine and Covenants Encyclopedia, Salt Lake City, Utah, Bookcraft, 1996.

Note: Mormon apologists are defending polygamy in our day.

I do not deny that polygamy is now abhorred in Western culture generally and in modern Christianity particularly. What I deny is that the source of that abhorrence is biblical. It is derived not from the biblical heritage but the classical-the abhorrence of polygamy comes from Greece and Rome. As orthodox a figure as Saint Augustine knew that the prohibition of plural marriage in the church of his day was only a matter of Roman custom: "Again, Jacob the son of Isaac is charged with having committed a great crime because he had four wives. But here there is no ground for a criminal accusation: for a plurality of wives was no crime when it was the custom; and it is a crime now, because it is no longer the custom .... The only reason of its being a crime now to do this, is because custom and the laws forbid it." Though pagan culture could freely tolerate multiple sexual partners, it could tolerate only one wife. In that respect Greco-Roman culture was very similar to contemporary Western culture. Are Mormons Christians?, Stephen E. Robinson, 1991.

Note: God did not want mankind to have plural marriages.

Genesis 1:27 So God created man in His own image; in the image of God He created him; male and female He created them.

Genesis 5:2 He created them male and female, and blessed them and called them Mankind in the day they were created.

Matthew 19:4-6 And He answered and said to them, "Have you not read that He who made them at the beginning 'made them male and female (not females),' and said, 'For this reason a man shall leave his father and mother and be joined to his wife (singular), and the two (not three or more) shall become one flesh'? So then, they are no longer two (not three or more) but one flesh. Therefore what God has joined together, let not man separate."

Note: The Holy Bible warns against associating with those given to change.

Proverbs 24:21-22 My son, fear the LORD and the king; Do not associate with those given to change; For their calamity will rise suddenly, and who knows the ruin those two can bring? 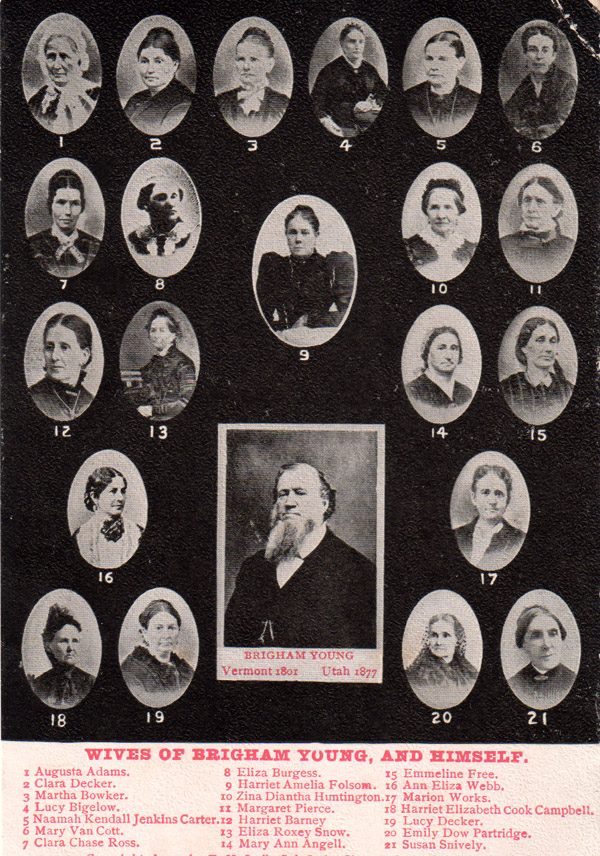 Brigham Young with some of his wives was a career criminal due to Abraham Lincoln signing the Morrill Act in 1862.