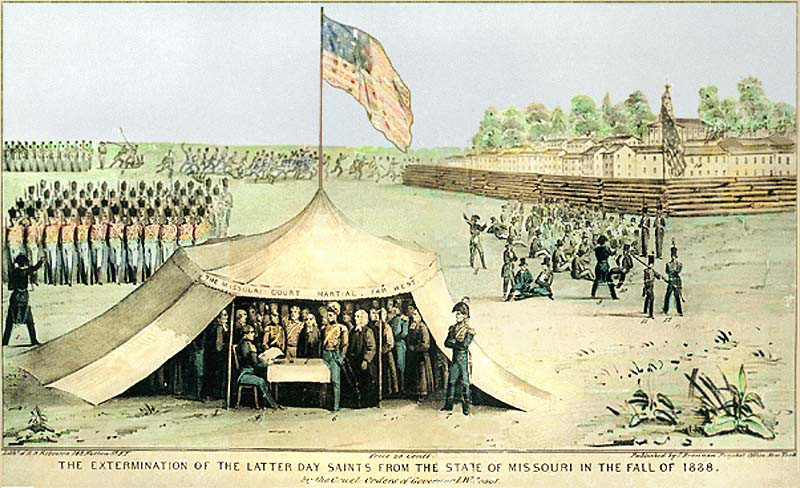 Unconditional surrender by Mormons in the State of Missouri 1838

We copy the annexed perspicuous statement of the Mormon difficulties from the St. Louis Evening Gazette, being more full than any we have time to prepare. To the Gazette's statement we can only add, that the editor has faithfully embodied the substance of the reports now in circulation in the city. In several instances the statements conflict very much with each other.

Speculation is now busy in the inquiry, what shall be done with the Mormon leaders who have surrendered? What is their offence and to what punishment have they subjected themselves? That the individuals who have been guilty of burning the houses or destroying property, or taking life, are amenable to the law, there can be no doubt, but for these offences each man must answer for himself -- their leaders, unless shown to have participated, cannot be held responsible in law. It is confidently asserted that the expense of this war to the state, will not fall short of two or three hundred thousand dollars. This must be made from the pockets of the people. It is due to the people, that before the appropriation for this purpose be made, the Legislature should institute a thorough investigation into the cause and history of the whole difficulty, and expose the guilty, be they whomsoever they may, to the public execration. We know not, although we have watched the matter closely from its commencement up to its termination, who is the most to blame, or upon whom public condemnation should fall, and we presume the mass of our readers are not better informed. As the people must 'pay the piper,' it is due to them that they should know who got up and kept up the dance.

The Mormon war has been terminated, by a surrender of the Mormon leaders to the troops under Gen. Atchinson. This happened on Sunday, Oct. 28th. On that day, about three thousand men, being part of the army of 5000, ordered out under Gen. Clark, comprising Gen. Atchinson's division made their appearance before the town of Far West, the county seat of Caldwell county, where the Mormons were entrenched. Upon their approach the Mormons had hoisted a white flag, which was shot down by Capt. Bogard, but was immediately replaced. Gen. Atchison then sent in a message, with a view to learn their wishes and intentions, when six of the leaders avowed their willingness to surrender, in the expectation that the Mormons should be unharmed. The surrender was accepted, and the individuals put under guard. Their names are Joseph Smith, Sidney Rigdon, George Hinkle, Lyman Wight, Parley P. Pratt, and Mr. Knight. The Mormons assembled, at Far West, comprised 700 men under arms. Of this number, a small body of 150, retreated and pursued their way to the northern frontier.

The reports vary as to what happened after the surrender. In fact, our intelligence does not come down clearly to a period, later than the day of the capitulation.

On the day after, Gen. Atchison received the orders of the Governor, which has already been mentioned in this paper, as directing the expulsion or extermination of the Mormons. It is said that, shocked and disgusted with the severity of the command, he retired and went home. After that event, it is stated that several -- some accounts say 40 of the Mormons -- were put to death. One version of the statement is, that the Mormons killed, at this time, were such as had not come into Far West. We need, however, more certain and authentic information, than we now have, on this head.

Gen. Clark, with the remainder of the troops collected from the Counties below Caldwell, was, on the Friday after the surrender, encamped in Ray county, and had not then reached Far West.

It is stated that, about the time of the surrender, a Company of men -- 200 in number -- fell upon a body of the Mormons, in Splawn's settlement, on Shoal Creek, about 20 miles from Far West. The Mormons, it is said, were 36 in number; and the story runs that all but four were put to death. Some of the names of the killed, as reported to us, are David Evans from Ohio, Jacob Fox, from Pennsylvania, Thomas M'Bride and his father, Mr. Daly, M. Merrill and his son-in-law, Mr. White, all from Ohio.

The facts about Bogard's fight are that two of his men were killed -- one outright and one died of his wounds. At the same four Mormons fell -- among them the captain of their band. Bogard's company were stationed on the line of Ray Co., to intercept communication between Ray and Caldwell. They had captured 4 Mormons; and to rescue these the attack was made upon them by the Mormons. Bogard's Company is said to have been 40 in number, and the Mormons 70.

As to the Mormon ravages in Daviess County -- the plundering and burning of which so much has been said -- we are informed that, before those hostile operations, the Mormons held a consultation, at which the propriety of the steps afterwards taken, was debated at large. Some of their number were averse to the plan, and nearly one third dissented from it. The reasons assigned for these measures, were alleged outrages by their enemies in Carroll and Daviess Counties. According to the Mormon statement, their houses and buildings, near DeWitt, in Carroll County, had been destroyed by their enemies, and they themselves expelled from the County and afterwards pursued, on their retreat into Daviess. It was, therefore, as they allege, in retaliation for previous unprovoked outrages, that they executed their system of violence and terror in the County of Daviess. Evidently, they could not have adopted a more suicidal policy -- allowing their own statements to be wholly true.

We have no time now -- and it would take more space than we can spare for it -- even with a knowledge of all the facts, to enter into a history of the origin and progress of this difficulty. But there is a statement in this connection, which we have heard but recently, and which we sincerely hope is not true. That statement is as follows.

About the 9th or 10th of last month, when about 80 Mormon families had been expelled from Carroll county, and driven into Daviess, a message was sent by them to the State executive, praying for his interposition in their behalf. The reply to that message was, that already the State had been put to a great deal of expense on account of these difficulties, and that he could see no cause to interpose, thus leaving the parties to fight it out!

The disposition of the captured Mormons presents a case of great difficulty. They are generally poor -- at least they have but little money and few means besides their stock and crops to preserve them from starvation. As it is, we suspect, these means are very much abridged. The presence of several thousand troops in their vicinity must have reduced them greatly. The proposition -- so it is given out -- is to remove them from the State. Who will advance the funds wherewith to consummate such a measure? And where shall they be sent? Their numbers exceed five thousand, men women and children! Are these 5000 people -- without any means and literally beggars -- to be thrust upon the charities of Illinois, Iowa, or Wisconsin?

It is said that the leaders are to be put to trial. We hope there may be a trial, and that the trial will extend to a most thorough, rigid, and impartial examination into the origin and progress of this extraordinary commotion. We hope that a searching operation will be applied to the guilty on all sides. It is only in such a way that the government and people of this State can place themselves in a just and dignified attitude before their sister governments and fellow citizens of the Union.

Late and important! from the Mormon war. -- Treaty concluded. -- By the St. Louis Bulletin of the 17th inst. we have accounts from the Far West; by 10 the 8th. Gen. Clark had arrived there with 1300 men, to guard the Mormon prisoners confined in that town, and had sent a despatch to Gen. Lucas of Jackson county, to return Jo Smith the prophet, and Hiram his brother, also the ringleaders Rigdon, Wright, Robinson and Hunt. Many of the Mormons have escaped from Caldwell county. The rest will not probably be driven out this winter. A Doctor Avord, one of the sect, has made some important disclosures.

Among many other things, that they associated themselves into three different societies, called Danites, Gideonites and the Destroying Angels -- composed of about 150 men altogether. The object of the bands was to carry on a regular and systematic course of robbery and murder, and swear out suits against all disclosures from the church, and others under false pretences of debts and claims against them, the proceeds of which were to be placed in a general fund for the use and benefit of the church.

The rumor of the engagement of Oct. 30, in which 30 Mormons were killed, is confirmed. The following is the treaty concluded with the Mormons by Gen. Lucas:

The following are the stipulations between the parties:

1st. To give up their leaders to be tried and punished.

2d. To make an appropriation of the property of all who had taken up arms, for the payment of the debts, and as indemnity for damage done by them.

3d. That the Mormons should all leave the state and be protected out by the militia; but to remain under protection, until further orders from the commander-in-chief.
4th. To give up all arms of every discription, to be receipted for.

For the purpose of arranging every thing in a proper and legal way, Gen. Lucas left Col. Williams, aid-de-camp to the commander-in-chief, Col. Burch and Major A. Rees of Ray county, to attend to drawing, writing, &c. with a company of men to execute all orders consistent with the stipulations.

Judge Cameron of Clay Co., Wm. Collins, of Jackson, Geo. Woodward of Ray, John Carroll and W. W. Phelps, of Far West, were appointed by Gen. Lucas and Col. Hincle, the commander of the Mormons, to attend to the adjusting of claims, &c.