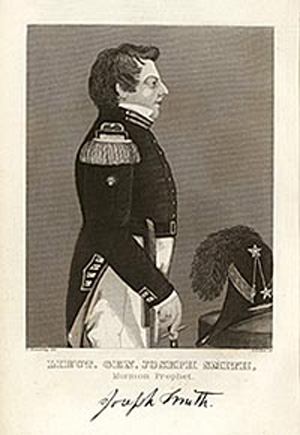 Joseph Smith the General and Prophet - 1841

To all Office-holders and Office-seekers in the State of Illinois, Greeting.


FELLOW  CITIZENS. -- At a drill of the Nauvoo Legion, at Ramus, a Mormon town situated in the western part of Hancock county, General Smith, otherwise the Prophet, stated, in a public speech, that Governor Carlin and suit, and many other respectable citizens of Quincy, together with Judge Douglass, and other officers of the State, were to visit Nauvoo on the 3d July next, to witness their splendid parade. Now we, the Gentiles, lookers on and suffers in the loss of porkers, &c., feeling that your own interests and the honor of the State is concerned in this matter, calmly warn you to keep away from these Mormons. We have long viewed with disgust upon the fawning sycophancy of politicians to this people; but we have been silent. Now, however, that it is officially announced, that the chief functionaries of our State are about to lend countenance to this most corrupt and abominable combination, we feel that, as citizens, it is our privilege, nay, our duty, to speak out. -- Know, therefore, that the politicians, of either party, who will fawn on the Prophet, or permit friends to do so in order to obtain his political influence, will be proscribed by the independent citizens of this and adjoining counties.

Further, it is our opinion that the national compact should be honored, and that Joe Smith should be delivered to the authorities of Missouri in obedience to the demand made on our Executive: -- And we submit the question, whether his excellency, the Governor, had a constitutional right to grant a commission for a responsible office to Joe Smith, when he held the demand of the Governor of Missouri for that individual; and more especially when the said Smith was charged with the capital crime of High Treason?

With great regard, we have the honor to subscribe ourselves orderly privates, in the Gentile Legion of Hancock, Warren, and McDonough counties.

The above communication was intended for our paper of last week, but was unavoidably crowded out. It is not yet too late, however, for those to whom it is addressed to take warning from it.