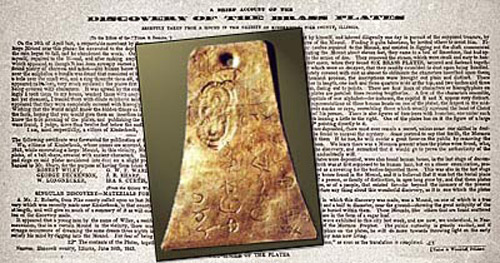 A Mr. J. ROBERTS, from Pike county, called upon us last Monday, with a written description of a discovery which was recently made near Kinderhook, in that county. We have not room for his communication at length, and will give so much of a summary of it, as will enable the reader to form a pretty correct opinion of the discovery made.

It appears that a young man by the name of Wiley, a resident in Kinderhook, dreamed three nights in succession, that in a certain mound in the vicinity, there was treasures concealed. Impressed with the strange occurrence of dreaming the same dream three nights in succession, he came to the conclusion, to satisfy his mind by digging into the mound. For fear of being laughed at, if he made others acquainted with his design, he went by himself, and labored diligently one day in pursuit of the supposed treasure, by sinking a hole in the centre of the mound. Finding it quite laborous, he invited others to assist him. Finally, a company of ten or twelve repaired to the mound, and assisted in digging out the shaft commenced by Wiley. After penetrating the mound about 11 feet, they came to a bed of limestone, that had apparently been subjected to the action of fire, they removed the stone, which were small and easy to handle, to the depth of two feet more, when they found SIX BRASS PLATES, secured and fastened together by two iron wires, but which were so decayed, that they readily crumbled to dust upon being handled. The plates were so completely covered with rust as almost to obliterate the characters inscribed upon them; but after undergoing a chemical process, the inscriptions were brought out plain and distinct. -- There were six plates -- four inches in length, one inch and three quarters wide at the top, and two inches and three quarters wide at the bottom, flaring out to points. There are four lines of characters or hieroglyphics on each; on one side of the plates are parallel lines running lengthwise. A few of the characters resemble, in their form, the Roman capitals of our alphabet -- for instance, the capital B and X appear very distinct. In addition, there are rude representations of three human heads on one of the plates, the largest in the middle; from this head proceeds marks or rays, resembling those which usually surround the head of Christ, in the pictorial representations of his person. There is also figures of two trees with branches, one under each of the two small heads, both leaning a little to the right. One of the plates, has on it the figure of a large head by itself, with two ==> pointing directly to it.

By whom these plates were deposited there, must ever remain a secret, unless some one skilled in deciphering hieroglyphics, may be found to unravel the mystery. Some pretend to say, that Smith the Mormon leader, has the ability to read them. If he has, he will confer a great favor on the public by removing the mystery which hangs over them. We learn there was a Mormon present when the plates were found, who it is said, leaped for joy at the discovery, and remarked that it would go to prove the authenticity of the Book of Mormon -- which it undoubtedly will.

In the place where these plates were deposited, were also found human bones in the last stage of decomposition; also some braid, which was at first supposed to be human hair, but on a closer examination proved to be grass; probably used as a covering for the bodies deposited there; this was also in the last stage of decay. There were but few bones found in the mound; and it is believed, that it was but the burial place of a small number, perhaps of a person, or a family of distinction, in ages long gone by, and that these plates contain the history of the times, or of a people, that existed far -- far -- beyond the memory of the present race. But we will not conjecture any thing about this wonderful discovery, as it is one which the plates alone can reveal.

On each side of this mound in which this discovery was made, was a mound, on one of which is a tree growing that measures two feet and a half in diameter, near the ground. -- Showing the great antiquity of the mounds, and of course, all that is buried within them. These mounds like others, that are found scattered all over the Mississippi valley, are in the form of a sugar loaf.

The plates above alluded to, were exhibited in this city last week, and are now, we understand, in Nauvoo, subject to the inspection of the Mormon Prophet. The public curiosity is greatly excited, and if Smith can decipher the hieroglyphics on the plates, he will do more towards throwing light on the early history of this continent, than any man now living.


Note 1: View the facsimile sheet of the Kinderhook plates, as published by the Nauvoo Neighbor in 1843. See also Rev. R. B. Neal's "The Champion Hoaxer Hoaxed," in the Apr. 20, 1907 issue of the Christian Standard and in the June, 1909 number of his Sword of Laban.

Note 2: On Sept. 3, 1856, the Salt Lake City Deseret News published the following sentences, as a part of its serialization of "The History of Joseph Smith": "I insert fac similes of the six brass plates found near Kinderhook, in Pike county, Illinois, on April 23, by Mr. R. Wiley and others, while excavating a large mound. They found a skeleton about six feet from the surface of the earth, which must have stood nine feet high. The plates were found on the breast of the skeleton, and were covered on both sides by ancient characters.... On the following week, the "History" continued this account, thusly: "I have translated a portion of them, and find they contain a history of the person with whom they were found. He was a descendant of Ham,through the loins of Pharaoh, king of Egypt, and that he received his kingdom from the ruler of heaven and earth" (cf. LDS HC 5:374-375). Smith wrote very little of his published history and this entry was evidently inserted by its editors, from the Nauvoo Journal of William Clayton.

Note 3: The source for the 1856 Smith paragraph was evidently an entry recorded in William Clayton's Journal, on May 1, 1843: "I have seen 6 brass plates which were found in Adams county, covered with ancient characters of language containing from 30 to 40 on each side of the plates. Prest J. has translated a portion and says they contain the history of the person with whom they were found and he was a descendant of Ham through the loins of Pharaoh king of Egypt, and that he received his kingdom from the ruler of heaven and earth." Compare the substance of the journal entry with a May 7, 1843 letter by Apostle Pratt: "Six plates having the appearance of Brass have lately been dug out of a mound by a gentleman in Pike Co. Illinois. They are small and filled with engravings in Egyptian language and contain the genealogy of one of the ancient Jaredites back to Ham the son of Noah" (The Ensign, Aug. 11, 1981, p 73).

Change in the Kinderhook Plates Story Quincy Whig – May 10, 1843


The young man Wiley, who found the plates spoken of last week, called upon us, and contradicts so much of our statement in reference to the same, wherein he is stated to have dreamed a dream three nights in succession, which led him to dig into the mound.


Note 1: Since Mr. Wiley and/or some of his accomplices in the Kinderhook Plates fraud later disavowed almost entirely their initial testimony in the matter, it is difficult to know whether Wiley was at the Whig office correcting his statement, or merely spinning the fraud out a bit more.

Note 2: It may be significant that, in a separate communication to the Nauvoo Times and Seasons, Messrs. Wiley, Fugate, et al. say nothing of dreams leading them to excavate the mound.