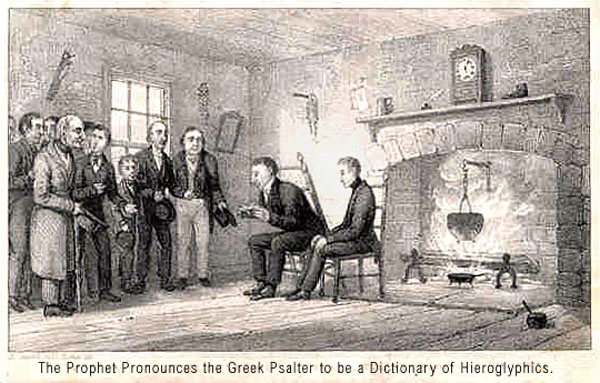 Joseph Smith's lack of knowledge about the Greek language.

THE  MORMON  PROPHET  AND
THE  GREEK  PSALTER.

We lately heard a story, which while it may make us mourn over the depravity of Human Nature, serves to show, among many similar facts, the low artifices and cunning tricks, to which the Mormon Prophet will resort, in order to impose upon the gullibility of his followers. The story is in this wise; and can be substantiated by respectable witnesses.

Some time since, Professor Caswell, late of Kemper College, near St. Louis, an Episcopal Clergyman of reputation, being about to leave this country for England, paid a visit to Smith and the Saints, in order that he might be better able to represent the imposture to the British people. It so happened that the Professor had in his possession a Greek Psalter, of great age -- one that had been in the family for several hundred years. This book, as a relic of antiquity, was a curiosity to any one -- but to some of the Saints, who happened to see it, it was a marvel and wonder. Supposing its origin to have been as ancient, at least, as the Prophet's Egyptian Mummy, and not knowing but the Professor had dug it from the bowels of the same sacred hill in Western New York whence sprung the holy Book of Mormon, they importuned him to allow 'brother Joseph' an opportunity of translating it!

The Professor reluctantly assented to the proposal; and accompanied by a number of the anxious brethren, repaired to the residence of the Prophet. The remarkable book was handed him. Joe took it -- examined its old and worn leaves -- and turned over its musty pages. Expectation was now upon tip-toe. The brethren looked at one another -- at the book -- then at the Prophet. It was a most interesting scene!

Presently the spirit of prophecy began to arise within him; and he opened his mouth and spoke. That wonderful power, which enables him to see as far through a mill-stone as could Moses or Elijah of old, had already in the twinkling of an eye, made those rough and uncouth characters as plain to him as the nose on the face of the Professor. 'This Book,' said he, 'I pronounce to be a Dictionary of Ancient Egyptian Hieroglyphics!'

The brethren present were greatly astonished at this exhibition of their Prophet's power of revealing hidden things. After their exaltation had somewhat subsided, the Professor coolly told them that their Prophet was a base impostor! -- and that the book before them was but a plain Greek Psalter! -- Joe 'stepped out.'

Professor Caswell, since his sojourn in England, has published a work entitled 'Three Days at Nauvoo,' in which this rich scene is represented in an engraving.