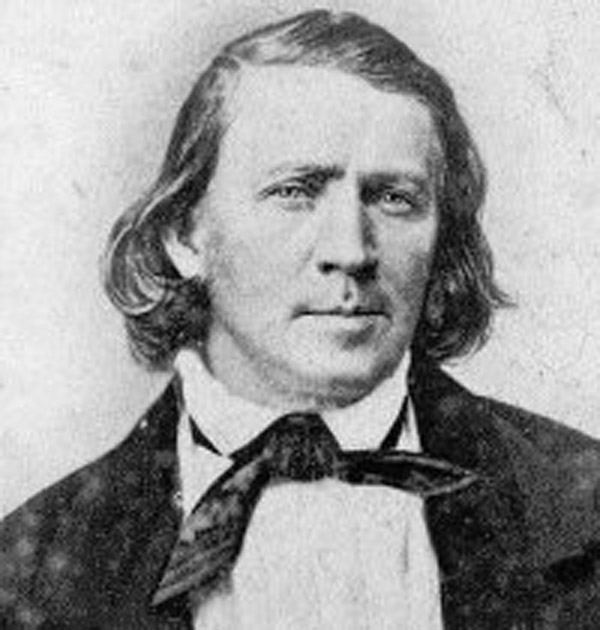 His Excellency, Brigham Young, President of the Church in 1851

TROUBLE AGAIN BREWING IN MORMONDOM. -- We have heretofore announced the return of Chief Justice Brandebury, Associate Justice Brocchus, Secretary Harris and Capt. Day, Indian Agent, from Utah Territory, and published some of the reasons assigned by these gentlemen for their apparent precipitate flight from their posts of duty. We have heretofore refrained from expressing an opinion as to the validity of their plea for taking this course, because not fully in possession of the facts in the premises. That Brigham Young (appointed Governor of the Territory by Mr. Filmore,) is a great blackguard and braggadocio, and still a greater scoundrel, we have long been aware, but we did not suppose, with all his native vanity, arrogance and wickedness, he would have had the audacity to utter such seditious sentiments and blasphemous anathemas against the Government and People of the United States as are attributed to him by the correspondent of the St. Joseph Gazette, until we saw the statement confirmed by Judge Brocchus, in a letter to the National Intelligencer. The resident white population of this territory, as our readers are aware, is composed almost wholly of "Mormons," or "Latter Day Saints," the general character of which people is too well known to need delineation here. Suffice it to say, their preachers use the most profane and obscene language, and that most of their principal men have a plurality of wives! Gov. Young is said to have ninety, and Heber C. Kimbal, the second in status, a like number! The state of morals in Mormondom may be gathered from these two circumstances alone.

After being driven from Nauvoo, some years ago, it will be recollected, the great body of Mormons removed to the Valley of the Salt Lake. They arrived there on the 24th day of July; and each year since their arrival, they have celebrated the anniversary of their entree. The 24th of last July, Brigham Young was their orator of the day, and announced to the vast audience the death of Gen. Taylor, in the following chaste language -- "Brethren, Zachary Taylor is dead and gone to hell, and I am glad of it!" The sentiment was received and echoed with great applause; and then, rising on tiptoe, in the furor of his passion, he exclaimed, "I prophesy, in the name of Jesus Christ, by the power of the priesthood that is now upon me that any other President of the U. States, who shall lift his finger against this people, will die an untimely death, and go to hell!" This is the feeling that pervades that seditious, wicked, and therefore dangerous population.

Judge Brocchus, who had been requested by the managers of the Washington National Monument Society to invite people of Utah to furnish a block of marble for the monument as "an offering at the shrine of patriotism," addressed a large concourse at their place of worship (?) called the "Bowery;" and in endeavoring to inspire a love of country and inculcate the duty of obedience to our laws, made an allusion to the above unchristian and seditious statements, and fearlessly expressed himself in regard to the existing defection of the Mormons towards the people and government. The speech was calm, dignified and to the purpose. Brigham, in a speech characterised by the coarsesr invective, replied to Judge Brocchus, and denounced the people and the government in the most menacing, vulgar and brutal manner; during which he intimated that if Judge B. should attempt a replication, there would be "pulling of hair and cutting of throats!" The audience was intensely excited, and had not Young and his confederates dreaded the ultimate vengeance of our people, there is no doubt that murder would have been instantly committed. The officers were subsequently denounced, in and out of "meetin."

That their disertion saved the lives of the "Fugitive U. S. Officers" -- (vide S. Louis Republican) -- we think highly probable; that they had very little inducement to remain, quite palpable; and yet it is almost equally plain that the editor of the Republican and ourself, had we been Justices Brandeberry and Brocchus, would have remained and run the risk! -- [at] least, we had [sic, had we] been abused as Judge Brocchus was, heard our Government slandered, and the memory of the lamented Taylor maligned by that scurvy scoundrel and bad-mouthed bigamist and debauchee, Brigham Young, we should have felt like leaving just about ninety distinguished widows before we left -- we should!

What is now to be done? Shall these seditious and traitorous villains be permitted to set at naught the authority of our Government? Will the President [merely] pocket the outrages of this people? Shall they be suffered longer to inhabit the fair valley which they now desecrate and contaminate by their pestiferous presence? Is it worthy the effort to send out a military force to awe them into obedience, with the view of making good citizens of them? Shall still other officers be sent to them to entreat them to yield homage and obedience to the Government, and simply tell them that uttering treason and threatening assassination are naughty practices, which Uncle Sam disapproves? Or shall they be officially notified to find and occupy some regions, without the jurisdiction of the U. States, so remote that the hand of annexation will not [be] likely to ever reach them? These are some of the considerations that will arise. Were we President Fillmore, the latter is the course we would recommend; and in the event of their refusal to comply, would send out a force of Missourians so to remove them, as to carry out the spirit of the order to the letter! This we would do -- "by the Eternal!" --- Kansas Ledger.