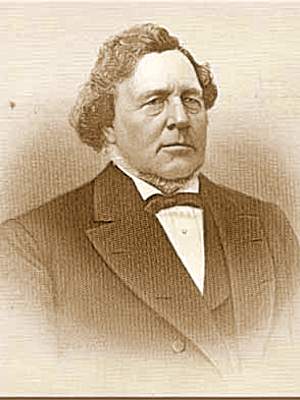 This sermon titled "Report of a visit to the southern country" was delivered by an Apostle of the Church of Jesus Christ of Latter-day Saints who was also a cousin of the Mormon Prophet Joseph Smith Jr.  The sermon was approved by President Brigham Young for distribution and was subsequently published in England. This and other Mormon sermons from the 19th century were scanned by Google and made available for non-commercial use. 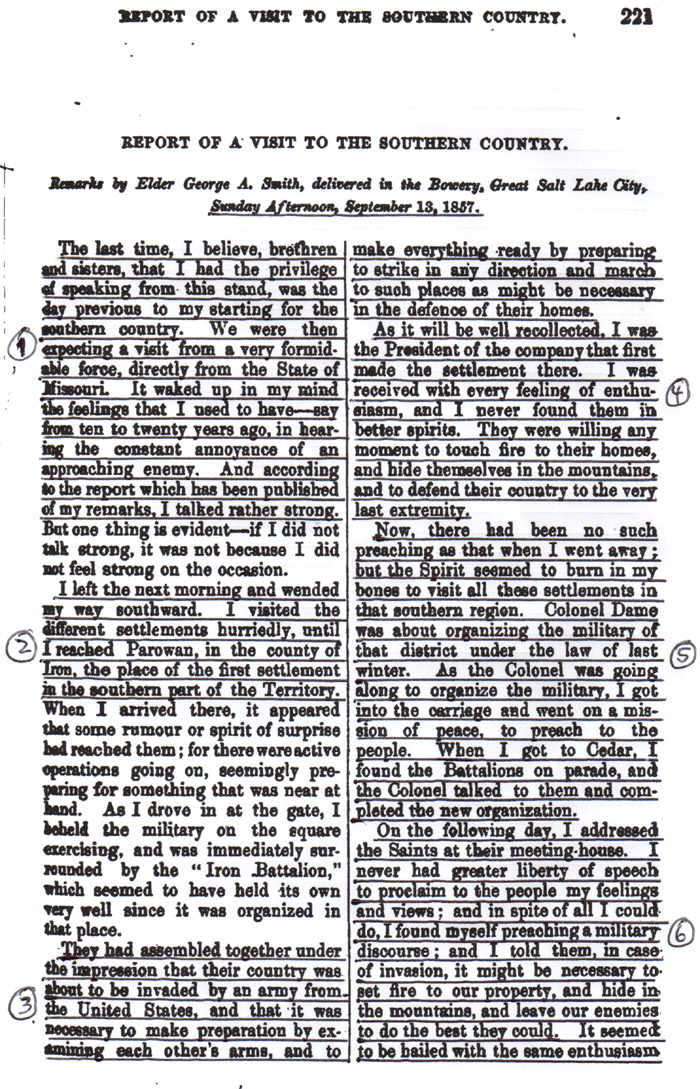 2) The next day, August 3rd, the richest wagon train of the 19th century entered Salt Lake City and George A. Smith hurriedly headed to south Utah.

3) Brigham Young warned all Mormons about the approaching United States army sent by evil doers in a sermon delivered on July 5, 1857.

4) Fanatical religious cult members will do anything that is commanded of them by their cult leaders including the murder of innocent people.

5) The Mormon message of peace in 1857 was death to all non-Mormons and the open practice of treason against the United States. 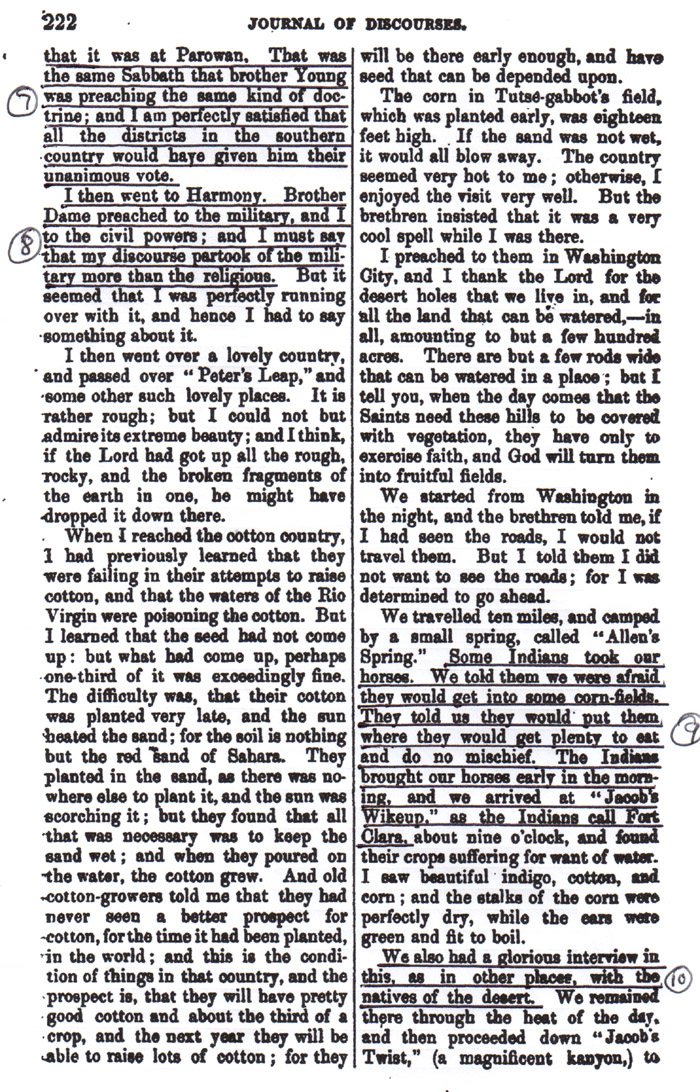 7) Brigham Young was preaching the same message of hate and treason to deluded Mormon fanatics in Salt Lake City.

8) Mormon Apostle George A. Smith filled Harmony with hate and treason as Mormon fanatics were in full agreement with him.

9) Indians in southern Utah were the servants of the Mormons and did what was told them by Mormon authorities.

10) Indians in southern Utah were peaceable and wanted no problems with white visitors to their camps. 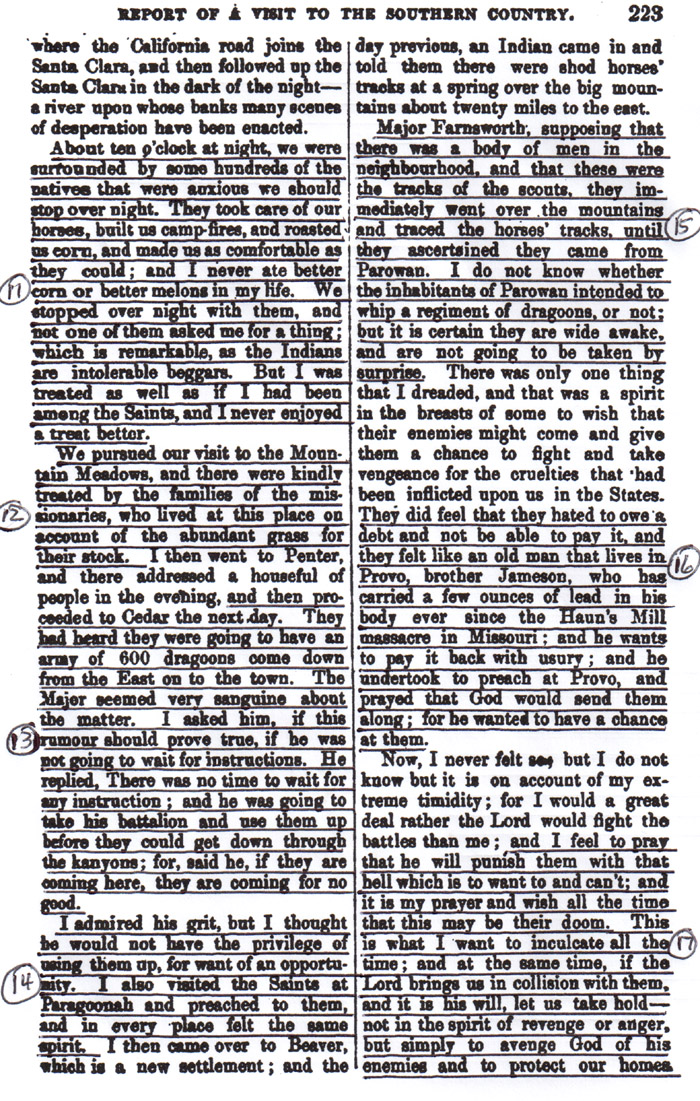 11) Mormons recruited some Indians for their murderous plundering scheme at this arranged secret meeting.

12) Mountain Meadows was scouted as the ambush area  for non-Mormon wagon trains and the United States army by the Mormon militia.

13) Cedar City Mormons were going to attack the United States army regardless of intentions.

14) Mormon Apostle George A. Smith was proud of the murderous attitude of the fanatical Mormon cult members.

15) Fanatical Mormon cult members were going to attack without questioning the LDS authorities thereby living out the dictates of the Mormon religion.

16) Revenge was a common topic of fanatical Mormon sermons and was integrated into their temple ceremonies.

17) Mormon Apostle George A. Smith continually preached that Mormons should fight against non-Mormons. 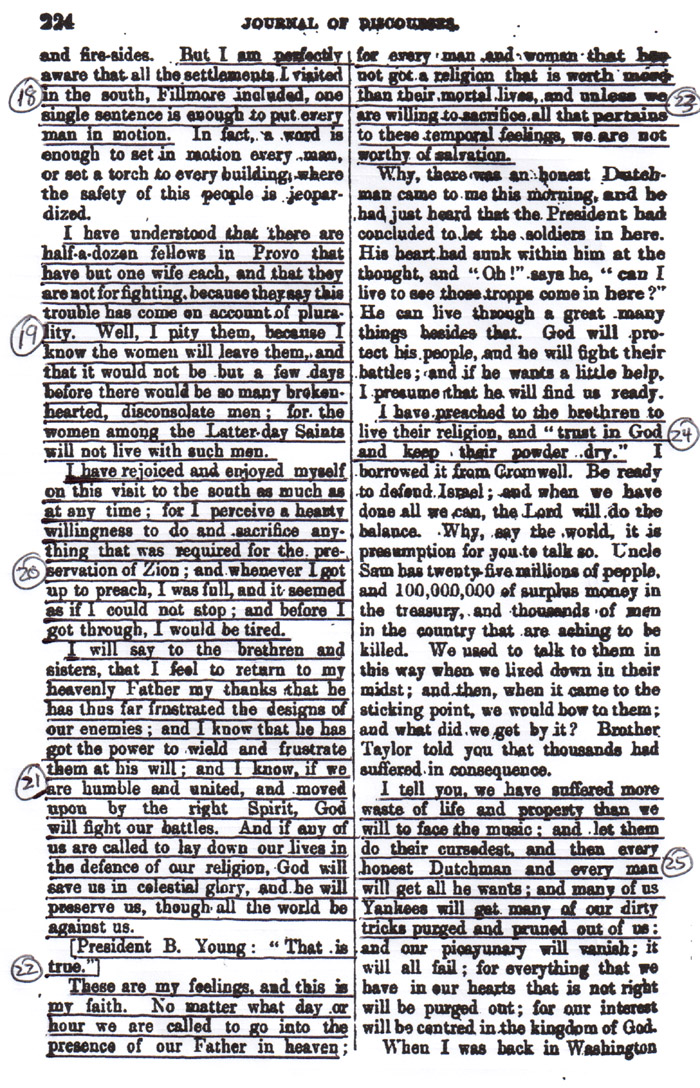 18) Mormon Apostle George A. Smith had fully prepared all Mormons in southern Utah to murder non-Mormons.

19) The Mormon gospel message of polygamy in the 19th century should never be confused with the Christian Gospel. (1 Corinthians 15:1-4)

20) Mormon Apostle George A. Smith enjoyed preaching a message of hate and treason towards the United States.

22) Brigham Young believed in the hate-filled death by fighting to be rewarded with celestial glory for fanatical Mormons.

23) Mormon authorities taught that their fanatical followers had to die for the Church of Jesus Christ of Latter-day Saints.

24) Mormon authorities taught their fanatical followers to live their religion through the murder of non-Mormons.

25) Law abiding citizens of Ohio, Missouri, and Illinois had to drive fanatical Mormons away for true peace to exist. 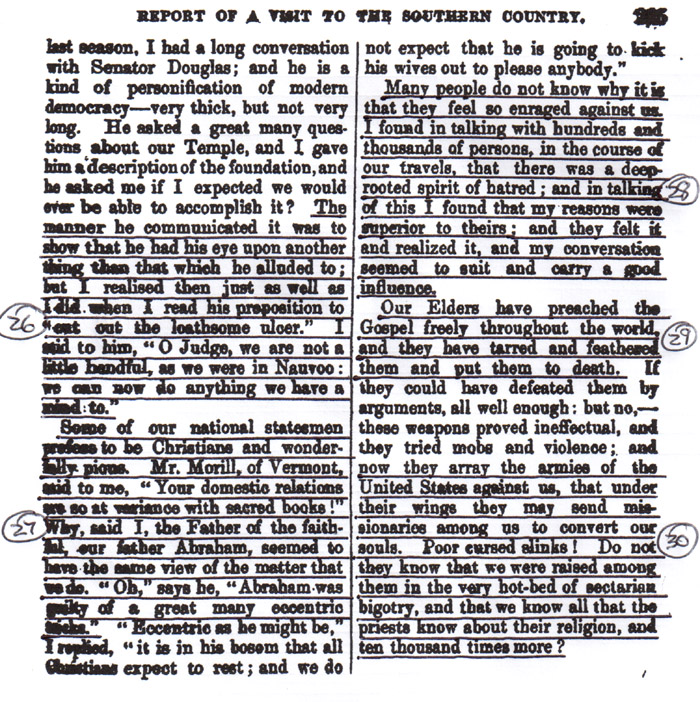 26) Mormon Apostle George A. Smith preached treason in Washington D.C. to Illinois Senator Stephen A. Douglas and many others.

27) Mormon Apostle George A. Smith preached that Abraham did not sin when he took multiple wives.  (Romans 3:23)

28) Uneducated cult members will always think they are wiser than everyone else when just the opposite is true.

29) Mormon elders were actively recruiting women for their polygamous Utah culture that created a backlash from fathers and husbands.

30) There are differences of opinion within Christendom but hate, slander, and murder are not to be found amongst true Christians.

Note: Brigham Young throughout his life proclaimed that the Indians had murdered approximately 120 men, women, and children of the Fancher wagon train on September 11, 1857. This false statement has been preached by the Church of Jesus Christ of Latter-day Saints for nearly 150 years.  In the 21st century, the church has had to admit some involvement but they have doggedly continued to make false statements about the involvement of President Brigham Young and Apostle George A. Smith in the murders. Numerous murders, thefts, jury tampering, unlawful polygamy, human trafficking of women, and open treason towards the United States made the Church of Jesus Christ of Latter-day Saints the largest criminal organization in the United States of America during the 19th century.

Brigham Young and the Massacre at Mountain Meadows

The tragedy at Mountain Meadows, September 1857