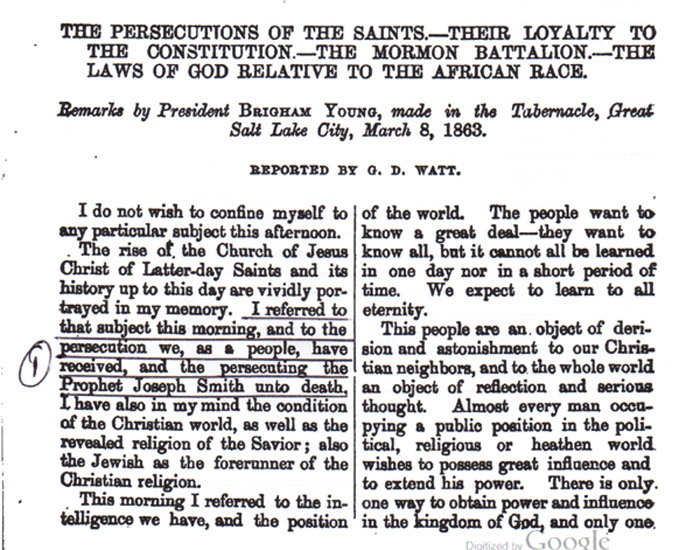 1) Mormon leaders as criminals were driven from law abiding states while religious fanatical dupes followed and gave them money. 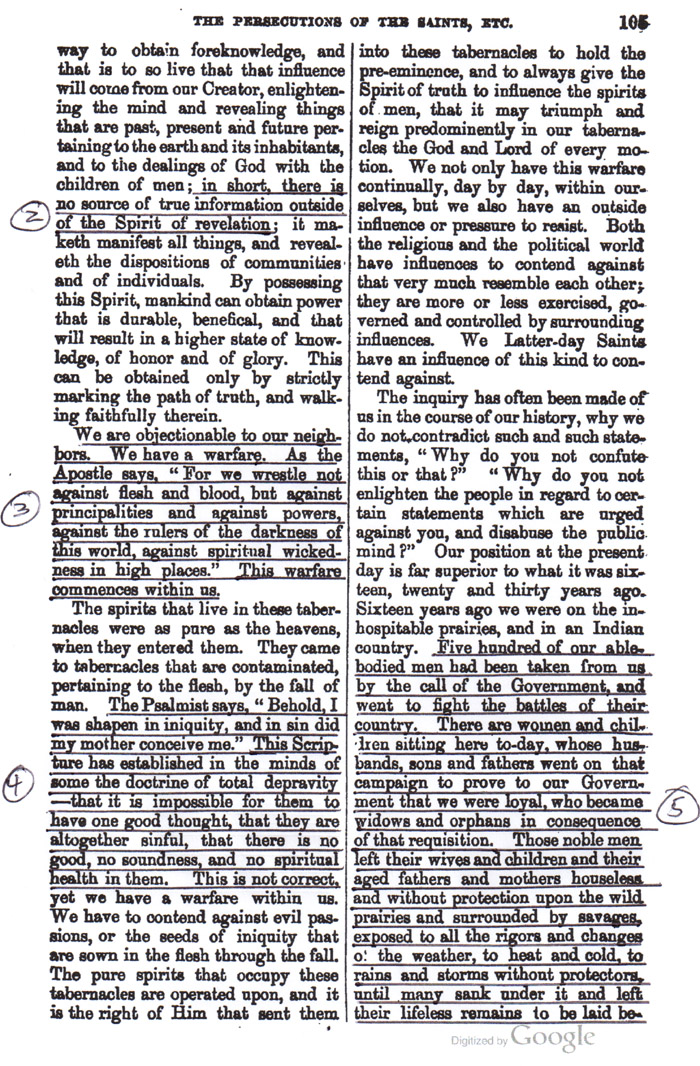 2) Fanatical Mormon dupes looked upon their false prophets as saviors instead of Jesus Christ. (John 14:6)

3) Brigham Young encouraged his fanatical followers to physically fight non-Mormons who were regarded as wicked.

4) Brigham Young taught heresy and that his followers did not need Jesus Christ or the indwelling of the Holy Spirit for a changed life.

5) Only 19 out of 541 Mormon men died from disease and accidents mostly in California and not on the prairies. 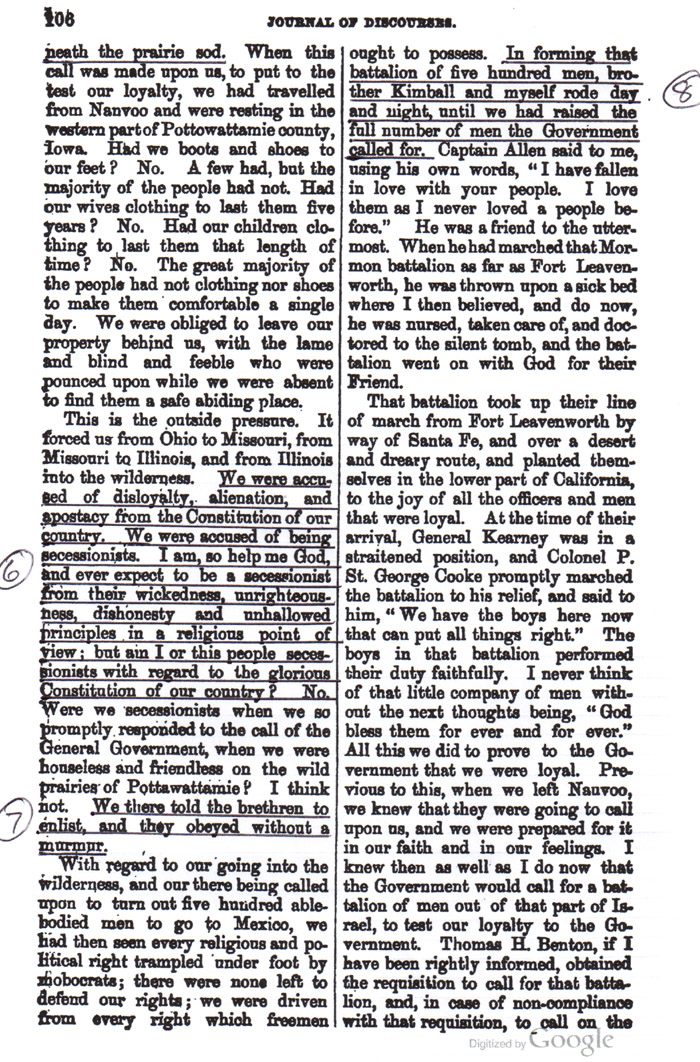 6) Brigham Young was a secessionist as he combined both church and state in violation of the United States Constitution.

7) Fanatical religious followers will always obey their leaders in everything and is a common trait amongst religious cults.

8) Brigham Young sold 541 enlisted Mormon men to the United States for an advance clothing allowance of $21,000 that he pocketed. 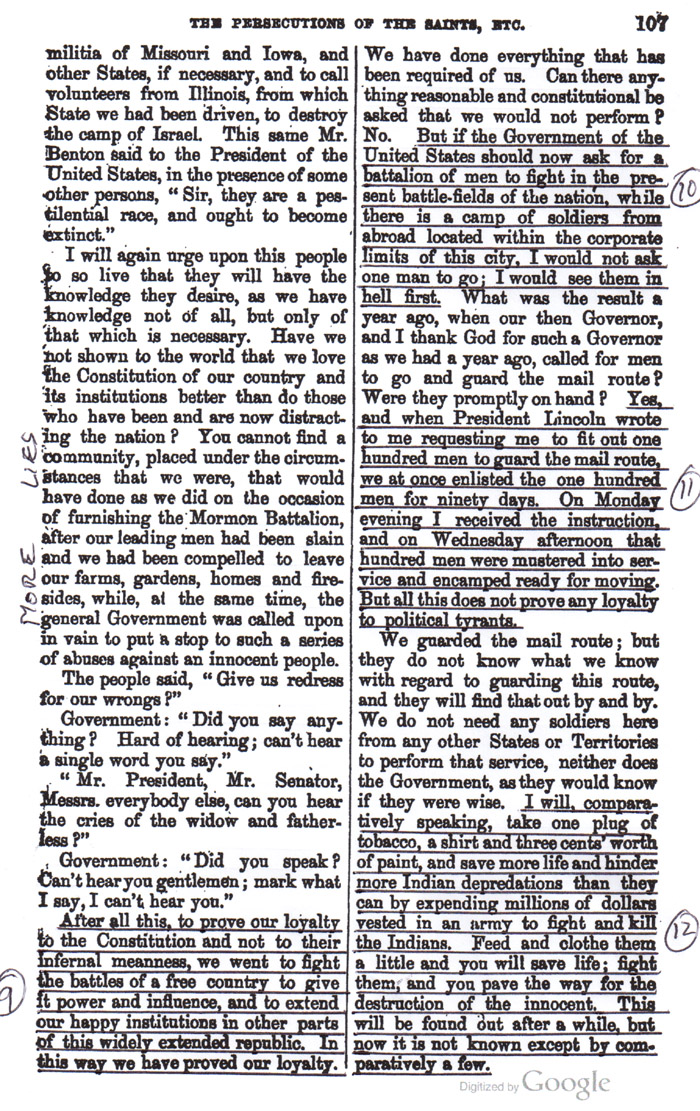 9) Elder Jesse Little at the urging of Brigham Young met with President Polk on June 5, 1846 and cut a deal to raise a battalion for money.

10) Brigham Young practiced treason and was not to be trusted. Accordingly, he was dethroned as Governor of the Utah Territory in the 1850s.

11) Brigham Young readily agreed to anything the United States needed for money as his fanatical followers had to be kept busy.

12) Brigadier General Conner was able to secure peace treaties with all Utah Territory Indians in 1863 despite Mormon interference. 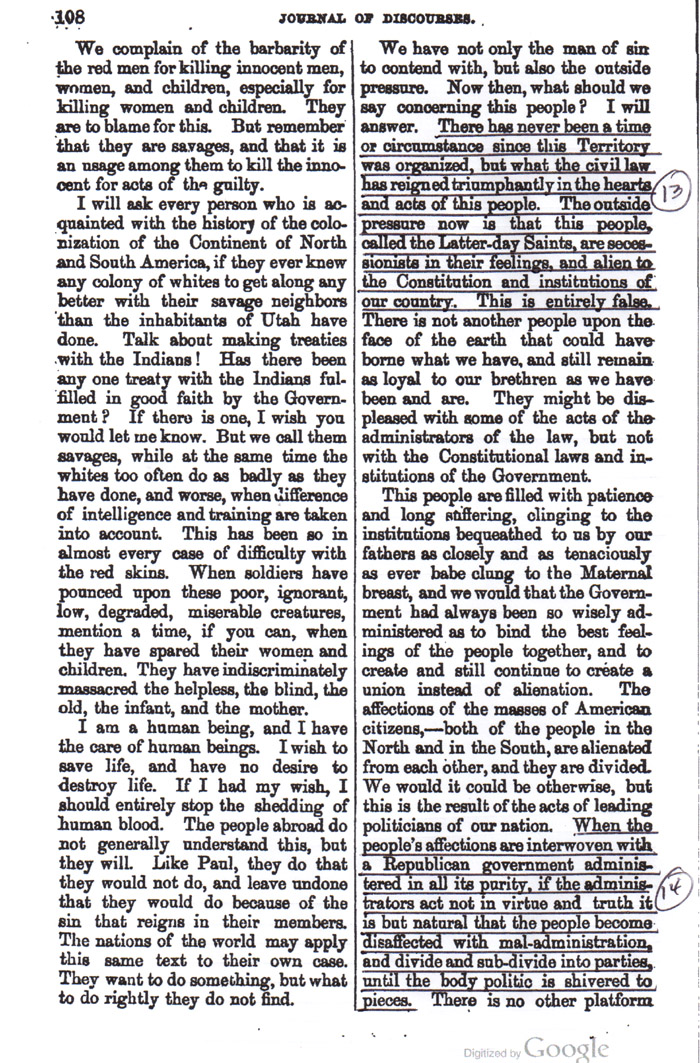 13) Brigham Young and his polygamist followers were in violation of Congressional legislation signed into law by Abraham Lincoln in 1862.

14) Brigham Young believed in a dictatorial Caliphate form of government with no differing opinions or non-Mormons allowed. 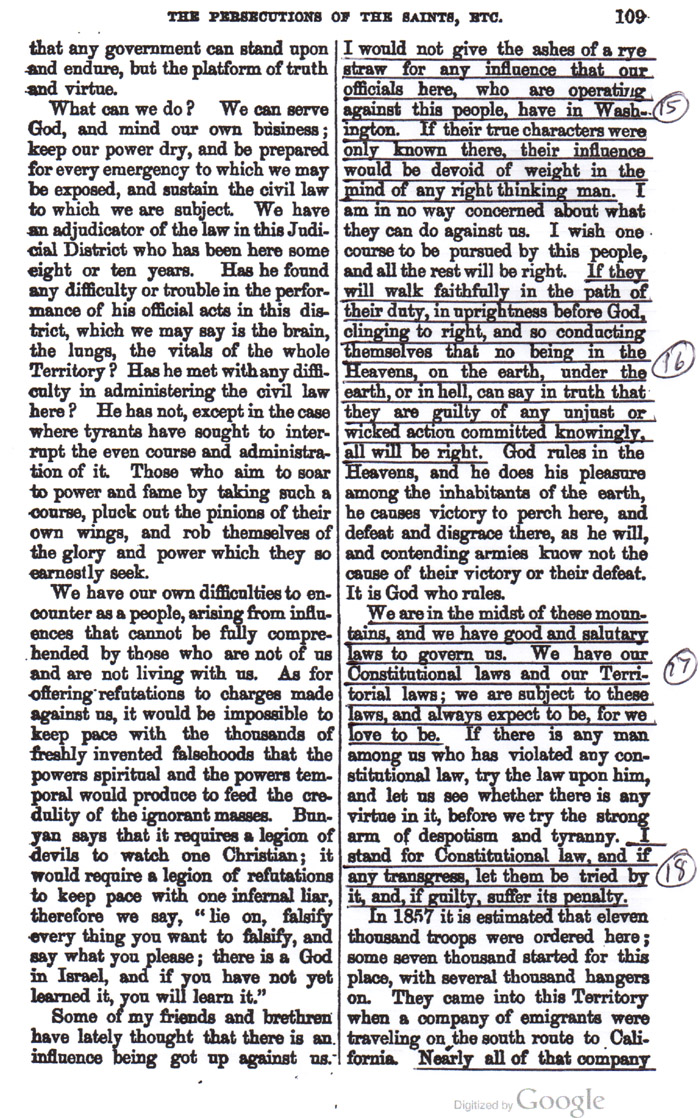 15) Brigham Young interfered with the administration of justice by Federal judges via jury tampering. (Romans 13:1)

16) Brigham Young expected Federal officials to be in obedience to his authority as his fanatical dupes were.

17) Brigham Young was in violation of the Constitution as it gave Congress control over United States territories.

18) Brigham Young was guilty of being accessory to criminal acts that Mormons committed against non-Mormons. 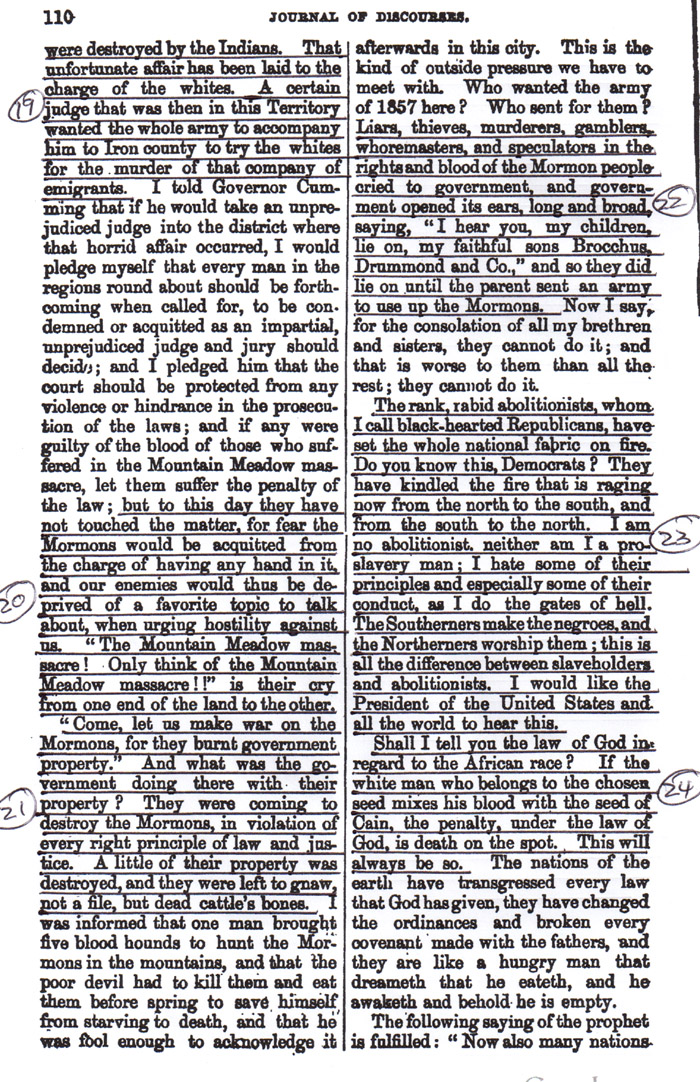 19) John D. Lee was convicted of murder in the Mountain Meadows Massacre after 20 years of jury tampering by Brigham Young.

20) All the Mormon men of Cedar City participated in the murder of the Fancher wagon train per the confession of William Rogers.

21) Mormons were found to be in possession of the Fancher wagons, equipment, horses, children not murdered and numerous cattle.

22) Cult leaders will always falsely accuse Federal officials who are trying to bring them to justice.

23) Brigham Young hated Abraham Lincoln and everyone who believed in the equality of mankind.

24) Brigham Young was a racist who did not believe in the equality of mankind. (Galatians 3:28) 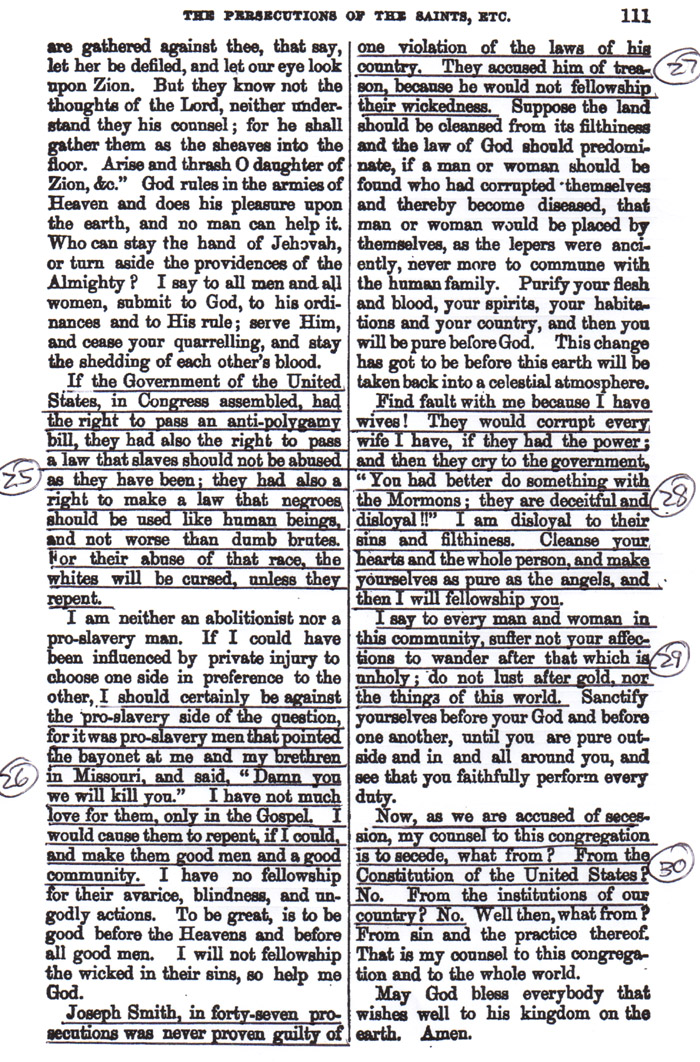 26) Brigham Young believed in revenge and made it part of Mormon culture by incorporating it into the temple ceremonies.

27) Joseph Smith was able to escape justice via a Missouri jailbreak, corrupt politicians, and the special city charters of Nauvoo.

28) Polygamist tyrants are insecure as they can never give love and affection to all of their wives on an equal basis.

29) Brigham Young became very rich as president and prophet of the church of Jesus Christ of latter-day saints.

30) Brigham Young and his Mormon fanatics were in violation of every Federal institution of the United States and were practicing sin.