NORWICH, N.Y. -- A local historian has rediscovered historical records that detail how Mormon church founder Joseph Smith was arrested on four occasions while living in Chenango County in the mid-1820s.

Chenango County Historian Dale Storms said she turned over the newly found documents to the Church of Jesus Christ of Latter-day Saints, which is based in Utah and has 11 million members worldwide.

Partial records of the arrests had long been in the possession of the county and known to historians, but Storms said the documents fill in some historical holes.

"It is not a small thing. These are important papers to a major religion," she said. "It's a piece of the historical puzzle that was missing for nearly 35 years."

Spokeswoman Kim Farah said the Mormon church was pleased original papers of Smith's 1826 and 1830 court proceedings had been located and returned to their proper place.

"They are important artifacts in understanding the life and times of Joseph Smith. However, they don't add anything new to the historical record. Before they were misplaced, they were studied and considered by those both in and out of the church," she said.

The documents include arrest warrants, court transcripts and legal bills from four separate charges filed against Smith. Storms said the cases involved Smith's involvement in glass looking, or treasure seeking, and being a disorderly person.

One of the documents includes a bill from then-South Bainbridge Justice Albert Neely to the county for services rendered. Included in the bill is a $2.68 charge for fees in examining the case of "Joseph Smith, the glass looker."

Storms said the records were turned over to the county recently by Norwich resident Richard Smith (no relation to Joseph Smith), whose mother was the county historian until 1997 and secretly had the records in her possession for the last three decades, Storms said.

The former historian squirreled them away in the early 1970s after they were taken without permission from the basement of the county sheriff's office in 1971 by Wesley P. Walters, a deceased pastor of the Marissa Presbyterian Church in Marissa, Ill. Storms said Walters took the papers because he thought they were unsafe where they were and might be destroyed.

NORWICH – County historians have rediscovered historical records proving the founder of the Mormon Church was arrested on several occasions while living in Chenango County. The papers turned up after a three decade absence, and may prove to be the most historically significant discovery in the modern history of the area. The documents, which have recently been turned over to the Chenango County

Historical Society, include legal bills from separate charges filed against Joseph Smith, the founder of the Mormon Church, now the Church of Jesus Christ of Latter-day Saints (LDS). The religious founder, the bills show, was arrested three times in the county between 1826 and 1830. County Historian Dale Storms said the cases involved Smith’s involvement in “glass looking,” or searching for treasure, and “being a disorderly person.”

“From the beginning, there have been people who have been against the Mormon religion. They sought to discredit him by saying he was arrested all over throughout Bainbridge,” Storms said. “It is not a small thing. ... These are important papers to a major religion.” 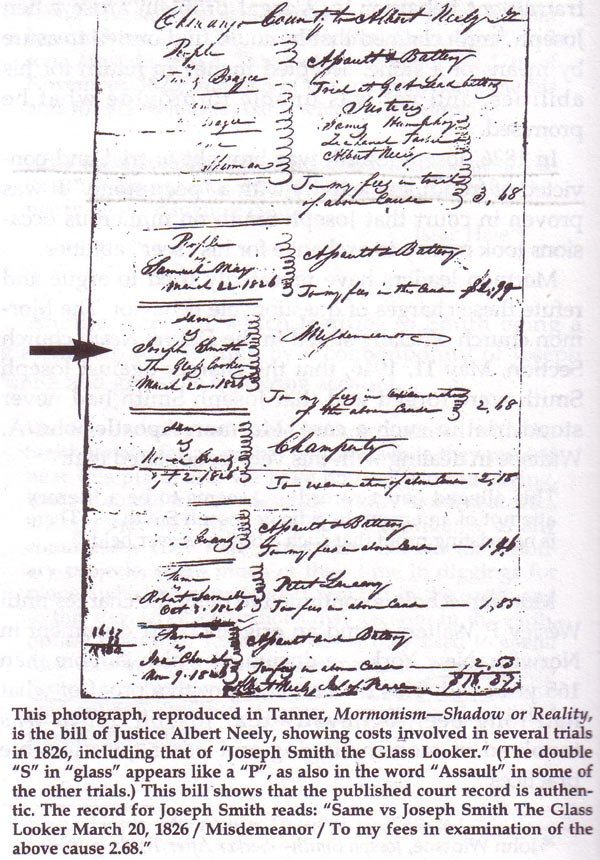