"I am not given to exaggeration, and when I say a thing I mean it." Page 85

Our stay in Salt Lake City amounted to only two days, and therefore we had no time to make the customary inquisition into the workings of polygamy and get up the usual statistics and deductions preparatory to calling the attention of the nation at large once more to the matter.

I had the will to do it.  With the gushing self-sufficiency of youth I was feverish to plunge in headlong and achieve a great reform here—until I saw the Mormon women.  Then I was touched.  My heart was wiser than my head.  It warmed toward these poor, ungainly and pathetically "homely" creatures, and as I turned to hide the generous moisture in my eyes, I said, "No--the man that marries one of them has done an act of Christian charity which entitles him to the kindly applause of mankind, not their harsh censure--and the man that marries sixty of them has done a deed of open-handed generosity so sublime that the nations should stand uncovered in his presence and worship in silence." 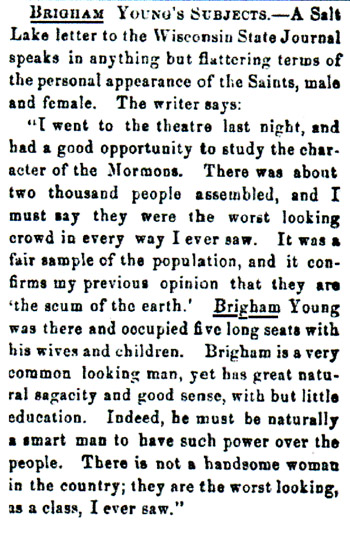 Reid, D-Nev., a Mormon, spoke at the opening of a Judiciary Committee hearing on the communities, the Deseret Morning News reported. He said he was glad the hearing was being held on Pioneer Day, a Utah holiday commemorating the arrival of the Latter-Day Saints in Salt Lake City.

"I am here to tell you that polygamist communities in the United States are a form of organized crime," he said. "The most obvious crime being committed in these communities is bigamy, child abuse -- teen and preteen girls are forced to marry older men and bear their children."

Polygamists, including women in long dresses, packed the hearing room. The focus was on law enforcement, and the polygamists did not testify although former sect members did.

Bill Number: S. 3313 (IS)
Bill Title: Victims of Polygamy Assistance Act of 2008 (Introduced in Senate)
Sponsor: Sen Reid, Harry   View all legislation sponsored by this member.
Introduced: 2008/07/23
Latest Major Action: 2008/07/23 Referred to Senate committee. Status: Read twice and referred to the Committee on the Judiciary.
Notes: There are no notes for this Bill

To establish a Federal Polygamy Task Force, to authorize assistance for victims of polygamy, and for other purposes.

IN THE SENATE OF THE UNITED STATES

Mr. REID introduced the following bill; which was read twice and referred to the Committee on the Judiciary

To establish a Federal Polygamy Task Force, to authorize assistance for victims of polygamy, and for other purposes.

Be it enacted by the Senate and House of Representatives of the United States of America in Congress assembled,

This Act may be cited as the `Victims of Polygamy Assistance Act of 2008'.

(1) Despite the fact that polygamy has been illegal in the United States for over 100 years, the practice of polygamy involving underage marriages is growing. Sizable polygamist communities exist in Arizona, Utah, and Nevada, and are expanding into other States.

(2) Polygamist communities are typically controlled by organizations that engage in widespread and systematic violations of State laws and the laws of the United States in order to enrich their leaders and maintain control over their members.

(4) Due to the systematic and sophisticated nature of these crimes, State and local law enforcement agencies would benefit from the assistance of the Federal Government as they investigate and prosecute these organizations and their leaders for violations of State law. In addition, violations of Federal law associated with polygamy should be investigated and prosecuted directly by Federal authorities.

(5) The work of State and Federal law enforcement agencies to combat crimes by polygamist organizations would benefit from enhanced collaboration and information-sharing among such agencies.

(6) The establishment of a task force within the Department of Justice to coordinate Federal efforts and collaborate with State agencies would aid in the investigation and prosecution of criminal activities of polygamist organizations in both Federal and State courts.

(a) Establishment- There is established within the Department of Justice a Federal Polygamy Task Force, which shall consist of the Deputy Attorney General, the United States attorneys from affected Federal judicial districts, representatives of the Federal Bureau of Investigation, the Internal Revenue Service, the Department of Labor, and the Department of Health and Human Services, and any officer of the Federal Government whom the Deputy Attorney General considers necessary to strengthen Federal law enforcement activities and provide State and local law enforcement officials the assistance they need to address the illegal activity of one or more polygamist organizations.

(1) formulate effective responses to the unique set of crimes committed by polygamist organizations;

(3) assist States by providing strategies and support for the protection of witnesses;

(4) track the criminal behavior of polygamist organizations that cross State and international borders; and

(5) ensure that local officials charged with protecting the public are not corrupted because of financial, family, or membership ties to a polygamist organization.

`(a) In General- The Director may make grants as provided in section 1404(c)(1)(A) to State, tribal, and local prosecutors' offices, law enforcement agencies, courts, jails, and correctional institutions, and to qualified public and private entities, to develop, establish, and maintain programs for the enforcement of rights and provision of social services (including witness protection, housing, education, vocational training, mental health services, child care, and medical treatment) for an individual who is exploited or otherwise victimized by practitioners of polygamy.

`(b) Authorization of Appropriations- In addition to funds made available under section 1402(d), there are authorized to be appropriated to carry out this section--

`(c) False Claims Act- Notwithstanding any other provision of law, amounts collected pursuant to sections 3729 through 3731 of title 31, United States Code (commonly known as the `False Claims Act'), may be used for grants under this section, subject to appropriation.'.

(3) by adding at the end the following:

`(3) $2,000,000, to be granted by the Attorney General to States and units of local government to investigate and prosecute polygamist organizations that violate Federal, State, or local laws.'.